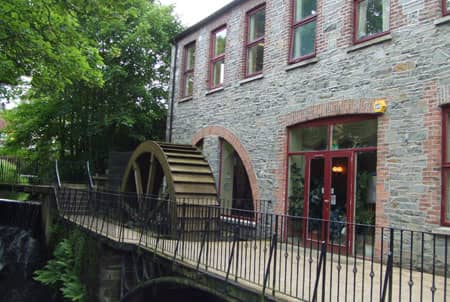 WORK on a major facelift for Keady Glen could be held up for years – after discovery of a predatory plant!

Japanese knotweed has been found in the local beauty spot and the situation has been getting worse. Indeed, it has even spread on to neighbouring properties.

This isn’t just any old weed; in fact, it has been described by the Environment Agency as “indisputably the UK’s most aggressive, destructive and invasive plant”.

The presence of knotweed – which spreads like wildfire – means the £650,000 glen project, which was being carried out to coincide with the construction of the new £2.5m Tommy Makem Community and Arts Centre, has been well and truly hampered.

It had been hoped to begin work this month and complete by Christmas. But officials are now having to tiptoe round the

situation and may be forced into splitting the project into two phases. And that could add significantly to the cost of the overall scheme.

It seems likely that the first phase – which includes the provision of a state-of-the-art play facility in the lower part of the glen – will proceed as planned. But the Joggers Pit Stop element will be put on the back burner until the knotweed has been successfully brought under control.

And that is something which could take anywhere up to four years – and an extremely expensive exercise into the bargain!

Officials would say it appears that the knotweed has travelled downstream, via the river, from other land. Adjacent landowners to whose property the weed has spread have been contacted and told of its existence, together with their responsibilities. They are being asked to co-operate with Armagh Council as it tries to kill off the predator.

Keady Credit Union – which is undergoing work at present – has also been contacted and briefed in relation to what action is being, and needs to be, taken, including decontamination of all equipment going on and off site.

Japanese knotweed can grow to a height of three or four metres in just 10 weeks – the equivalent of two grown adults. Underground, its roots – or rhizomes – can spread seven metres horizontally!

A chartered landscape architect – tasked in compiling a report on the Keady situation – concludes that the plant appeared on the outside bank of a bend in the river, before spreading to parts of the south-western boundary of the site and beyond.

The report states: “The rhizomes produce long shoots at their tip which send up shoots to the surface. The root system is so strong that it can cause the ground to heave and lift concrete and tarmac.

“As Japanese knotweed can grow through tarmac and fractured concrete, it can damage buildings and roads.”

And, as the report shows, it is hard to contain without decisive action. “Studies have shown that a one centimetre section of rhizome can produce a new plant in 10 days. Rhizome segments can remain dormant in soil for 20 years and still produce new plants.”

Burning of fresh growing material has little effect and cutting and pulling would require deep burial on site or through licensed landfill. A faster-track approach would have involved excavating – to a depth of seven metres – and removing the plant, along with the contaminated soil.

But that is a process which, due to the hugely heavy infestation in Keady, could have cost in the region of £100,000 plus VAT!

Instead, a time-consuming treatment of spraying and injecting into each individual plant cane, using specialised equipment, is being undertaken. Adjacent landowners are being doorstepped for written consent to treat their knotweed, in a bid for a total wipe-out and to prevent the ruinous rogue’s return.