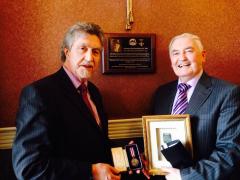 Newry is believed to be the only city that can boast of having been home to two recipients of the George Cross awarded for individual acts of bravery.

And now both Raymond Kelly and Max Blaney will be forever remembered in their native city with the unveiling of two portraits.

Raymond Kelly died in the Bay of Biscay in 1947 after saving the lives of two men and trying to rescue a drowning woman. His medal was awarded posthumously the year after he died.

Max Blaney a bomb disposal officer during World War Two, died in London in 1940 when a device he was trying to defuse exploded.

He had previously defused other bombs dropped on east London by the Germans.

He was one of 10 killed when an underground explosive they were attempting to make safe detonated. He was awarded the George Cross the following year.

Plaques, presented by the Ulster History Circle, had previously been unveiled at the former homes of each of the soldiers.

The George Cross is the highest award given for gallantry in the UK.

The portraits of both soldiers were unveiled recently at Newry Town Hall.

Among those present was Raymond Kelly’s younger brother, Willie.