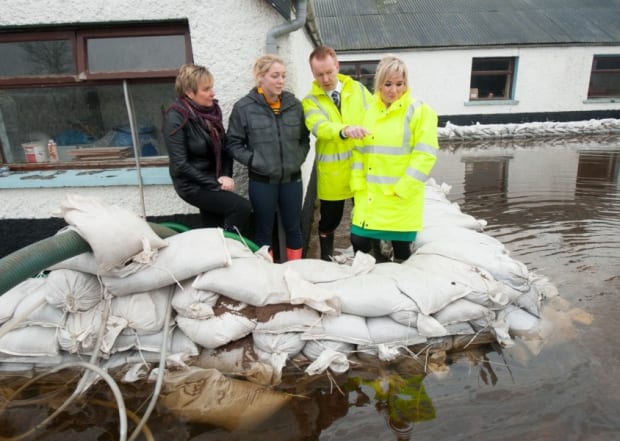 A young County Armagh couple – recently returned from Australia after three years – have been left devastated by the damage caused to their new homes by the recent floods.

The new home at Derryall, Portadown, has been submerged under water and many long days and nights preparing the property for their return has been undone. But Megan Ni Raifeartaigh and fiancé Adrian McKernan have been overwhelmed by the local support and have insisted they are going to stay put.

They were also visited by Rivers Agency chief executive David Porter and DARD Minister Michelle O’Neill, as the Minister launched a new £1million scheme to help people protect their homes from flooding.

Despite the flooding, they have remained in their home as they try to curb the potential for any further damage caused by the rising waters of Lough Neagh.

Megan told BBC NI the nightmare she and Adrian had – and still are – enduring.

She said: “It’s devastating, especially because I didn’t actually feel quite ready to leave Australia because we’d made a good life out there as well, so coming back here to this happening, it’s just sort of straining me,” she said.

“It’s a lot of pressure on me and Adrian, especially when we’re planning a wedding as well for next year so we don’t know whether we’re coming or going.

“We’ve to ask each other each day what day it is. We can’t even start work because this a 24 hour job. Adrian’s father had to actually take a week off work too to help us.”

The couple have had to pull up all their floorboards and their new kitchen and the strain has been unbearable.

Despite contemplating returning to Australia, they insist they will persevere and appreciate all of the help they have received.

Megan added: “Since we’ve been back, I’ve just fell in love with it and I don’t want to give up on it and I mean this area is beautiful. I’m not going to give up but I’m hoping that we’ll have the resources and the help there to get us through this.”

Agriculture and Rural Development Minister Michelle O’Neill, meanwhile, has launched the new £1million scheme to help people like Megan and Adrian to protect their homes from flooding.

It will allow owners of residential properties at risk of flooding to install physical barriers and equipment to help reduce the impact of flooding on their homes.

The Minister said: “We have all seen the damage and hardship that flooding can have on individuals and communities over recent weeks so I am delighted that this scheme will help homeowners, that may not be able to benefit from a larger scale flood alleviation scheme, to protect their property from flooding.

“Those eligible for the scheme will receive a 90% grant towards the cost of installing equipment to protect their homes. Depending on the size and type of property we would expect the contribution from homeowners to be around £350 to £750.

“It is not always possible to completely prevent flood water entering a home, however, individual property protection can reduce the potential internal flood depth, and this can substantially reduce flood damage and the subsequent costs of property repair.”

The overall cost of protecting an average home is expected to be between £3,500 to £8,000 using measures such as door barriers, airbrick covers, non return drainage outlets and waterproofing walls.

“I would encourage people who have flooded before, or may be at risk of flooding, to contact Rivers Agency and determine if their property meets the scheme eligibility criteria,” Minister O’Neill continued.

This scheme is a new approach to flood protection, developed by Rivers Agency on behalf of the inter-departmental EU Floods Directive Steering Group.

It will run for at least two years at which time a review will be undertaken to determine its longer term viability.

Further information and scheme application pack can be downloaded from https://www.dardni.gov.uk/homeowner-flood-protection-grant-scheme