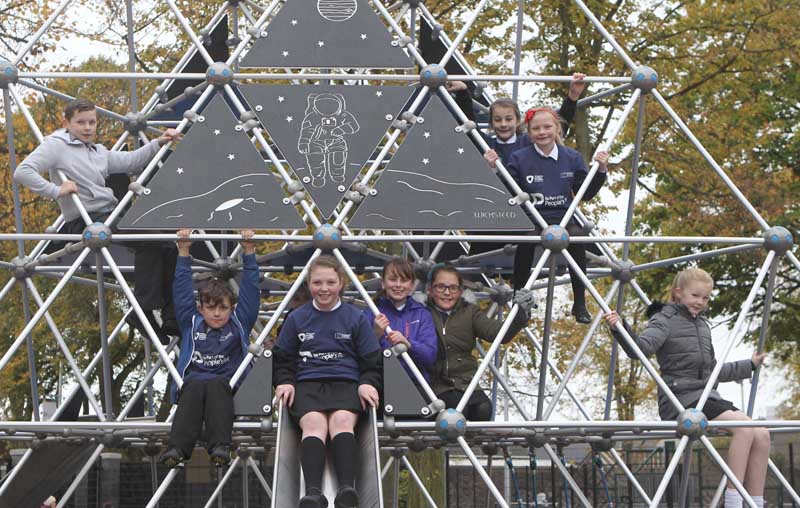 The People’s Park in Portadown was officially launched at a high profile event on Monday showcasing all the outstanding facilities on offer.

The refurbishment of the Park was made possible following Craigavon Borough Council securing £5,469,045 for the SPACE Project from the European Union’s PEACE III Programme, managed by the Special EU Programmes Body (SEUPB).

Following speeches and the unveiling of the official plaque by the Lord Mayor, guests checked out the fantastic new features dotted throughout the sprawling urban oasis including a state-of-the-art play park, themed gardens, a pond area, two bridges, two grass soccer pitches, a grass multi sports pitch catering for Soccer, American Football, Gaelic Games and Rugby as well as a 7-aside 3G synthetic pitch, an amphitheatre and 5-aside multi use games area (MUGA), both of which are flood lit.

Activities showcased at the event by local primary school children included dance performances in the spacious amphitheatre, basketball in the impressive court and fun games throughout the play park.

Lord Mayor of Armagh, Banbridge and Craigavon, Councillor Darryn Causby, said: “I am delighted to officially launch the refurbished People’s Park which will serve as a real hub for residents throughout Portadown and beyond to come together, relax and enjoy.”

“The remarkable transformation has turned the Park into a spectacular green space in the midst of a bustling town. It is here for everyone to enjoy and a lot of consultation, planning and hard work has gone into how it should look. Come on down and check out all of the fantastic new features that have been installed and look out for upcoming events taking place.”

The Lord Mayor of Armagh, Banbridge and Craigavon, Councillor Darryn Causby with special guests at the official opening of Portadown People’s Park

Welcoming the project, Gina McIntyre Chief Executive (Designate) with the SEUPB, said: “This Park will be used by the entire local community in a manner that encourages mutual respect and understanding.

“In doing so it will deliver upon one of the core objectives of the EU’s PEACE III Programme, the creation of a shared neutral space which, we have seen, can be used as a catalyst for community integration and reconciliation,” she continued.

Minister of Finance and Personnel Arlene Foster welcomed the launch, saying: “The aims of the PEACE III programme, to promote cooperation and reconciliation, are being furthered by the completion of this new shared facility.”

“The new park offers a tremendous opportunity for the local community, in Portadown and from the wider area, to come together to enjoy sports, events and play.”

Minister for the Environment, Community and Local Government Alan Kelly TD, adds: “This exciting project is to be greatly welcomed as an exemplar of what can be achieved through the power of communities working together to attain mutually beneficial goals. I am sure that this excellent facility will be widely used and enjoyed by all the people of Portadown”.

Match-funding for the project has been provided by the Department for Social Development in Northern Ireland and the Department of the Environment, Community and Local Government in Ireland.

Mr O’ Dowd said: “The People’s Park is undoubtedly a fantastic resource and should be enjoyed by all those living in the town, the borough and indeed further afield. The new play park, MUGA, 3G pitch, walk ways and gardens mean that the park can be enjoyed by children, young people, families and our senior citizens alike. The funding by the SEUPB has radically transformed the park into a modern facility that can host a range of events.”

He continued: “The redevelopment of the People’s Park was in the pipe line and lobbied for over a number of years. The local community and the wider society have waited patiently for the investment to happen. Council Officers and those Councillors who supported this project from the start overcame numerous hurdles and attempts to block the development. Thankfully, the excellent facility that is now available to all, has been completed and launched with a number of hugely successful events already. Including the selling out of tickets from the Halloween Spooktacular event within just 24 hours.

“This is not just a capital project of course. It is an opportunity to build a space for everyone to share. The opportunity should be seized upon and we should continue to discuss how we can make shared spaces of other areas in Portadown, including the town centre. “