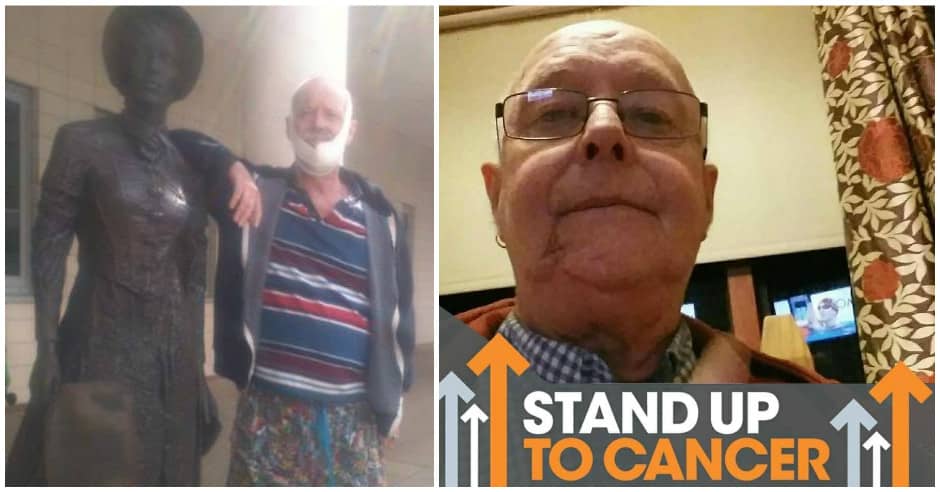 A terminally-ill county Armagh man could be left without a permanent GP after it emerged the Bannview  practise in Portadown has failed to replace its only full-time doctor.

Edward ‘Mitch’ Crossan, 64, was diagnosed with an incurable mouth cancer in April 2015, with doctors giving him just months to live.

However, Mr Crossan has defied the odds, and continues to do so, but relies on a weekly doctor’s prescription for powerful painkillers.

There were initial fears the Bannview practise was to close on January 13 as Dr Heanen — its only GP — steps down from her role at the centre but the Health and Social Care Board said they are keeping the doors open beyond that date.

Mr Crossan’s wife, Siobhan, told Armagh I how she and her husband found out about the latest development on social media.

“We heard rumours in the past but my daughter tagged me in a post yesterday,” she explained.

“We didn’t receive anything official to say that there would be changes at the practise but it’s really important my husband has a doctor.

“He gets MST morphine, which is slow release morphine tablets, which he has to take every day and because it’s morphine it has to be got with a prescription from the GP every week.”

She added: “Mitch was diagnosed as terminally ill April 2015. The doctors didn’t think he’d live until Christmas of last year but thankfully he’s doing okay. He goes to see consultants down in the Royal [Victoria, Belfast] every few months.

“They’re absolutely amazed with how he’s doing. He underwent a bout of intense radiotherapy; they skipped chemotherapy because they said it wouldn’t work. He has cancer of the mouth.

“At the minute, he seems to be in some sort of remission. His surgeon did say if he was a betting man he’d put money on, 100 percent, of the cancer returning. The situation could always deteriorate but he will always need a GP.”

She continued: “There’s no easy solution but at the end of the day there’s more than my husband who needs a GP, 5,000 people have been affected. There are elderly people out there who don’t even know how to register with a doctor.

The Health and Social Care Board released a statement this afternoon, claiming, despite a letter from GPs within Portadown Health Centre, they’d not be closing.

The statement read: “[We] can confirm that Bannview Medical Practice in Portadown will not close on 13th January 2017.  We would like to reassure patients of the Practice that high quality and safe GP services will continue to be provided from this date.   No decisions have been made to close the practice.

“The Board is currently in discussions with a potential contractor to take over Bannview Medical Practice and we will provide a further update to all patients with developments as they progress.

“The Board and Practice apologise to all patients for the current inconvenience and will continue to work diligently together over the coming days to endeavour to ensure normal cover and the full provision of general medical services resumes as soon as possible.

“We would ask patients to continue to support the Practice at this time.”

Councillor Julie Flaherty has said the statement is nothing more than sugarcoating a problem that the Board knew about for months.

Speaking to Armagh I, the Ulster Unionist representative, said: “They can sugarcoat all they want with a statement about ‘ongoing discussions’ but they’ve been saying the same thing for months now. This is nothing new to the Board.

“They had three choices; employ another contractor, merge the services or employ locums. Now we’ve been made well aware they can’t merge the practises within the health centre, they haven’t employed a new contractor, as they said the same thing back in November, so it’s a locum service.

“And that’s in the region of £500-a-day until March. That’s not a sustainable measure, it’s simply cover.

Cllr Flaherty, who was one of a small number of elected representatives who questioned this situation from the beginning, argued about the quality of a locum service for more complicated users.

“And as for Mr Crossan, what sort of care will he get? A locum service offers no consistency for what is a complex patient. They are getting locums in to manage, in their words, on a ‘day-to-day’ basis.”

MLA Doug Beattie added: “Having been brought to the precipice it now looks like the Health and Social Care Board will at last put measures in place to keep the Bannview practise open beyond 13 January. I am led to believe they will be doing so by employing Locum GPs to cover the practise at a cost of £500 a day per GP until a contractor can take over the practise.

“This news is welcome but having received a letter from the Portadown Health Centre GPs on the 23 December 2016 telling them about the implanting closure of the Bannview practise I find it unacceptable that the HSCB have waited until now, and only after considerable media attention, to put patients minds at rest.  It took the release of the letter from the Portadown Health Centre GPs to the HSCB, and subsequent media attention on the issue through the course of today (Wednesday) for them to inform elected representatives, Portadown GPs and the general public what their short term rescue plan was.

“I look forward to the long term plan for GP services in Portadown and a degree of stability. In the meantime I will continue to show my support for all the GPs who work under immense pressure in the Portadown Health Centre.”

Meanwhile, a protest – organised by Portadown-based photographer and Bannview patient Tony Hendron – will still go ahead this Friday, January 6.

He is not convinced that the facility will not close and the demonstration will take place outside Portadown Health Centre at 12.30pm.

Mr Hendron revealed the intention to press ahead via his Portadown Picture Post page, as he and many others have not been convinced by the board’s words today.

He said: “The statement offers no guarantees and fails to give details of what will actually happen when Dr Heenan’s resignation takes effect. Of course we would like to take them at their word but the current facts contradict them.

“Firstly, staff at the practice are on redundancy notice. With no GP partners left in the practice there can be no service. Dr Heenan herself said the practice will close. The BMA have told other doctors that it will close. All other practices in the centre are applying for emergency closure of lists in order to protect themselves if the board tries to foist 1000 patients on each of them.”

He added: “The board has handled this situation abysmally. Doctors in the Bannview practice warned of a situation like this two years ago with a notice on the crisis brewing in GP services. Other people also warned the board but no-one listened. The board is now firefighting and playing for time.

“At the surgery today there was a notice saying emergency appointments only. What good is that to patients?”