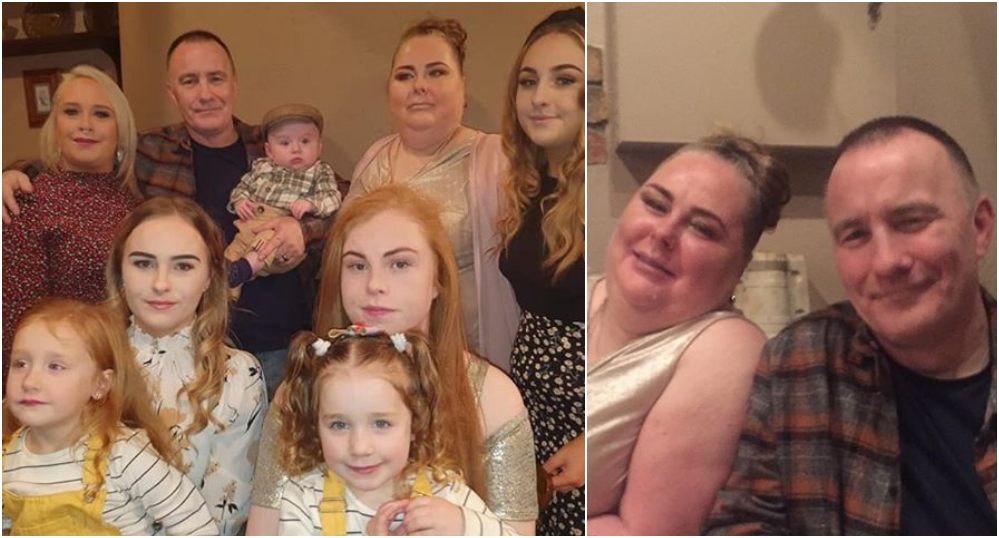 A Co Armagh woman, who said tearful goodbyes to her husband and daughters after fearing she would die from Covid-19 in hospital, has battled back to return home for an emotional reunion with her family.

And Sharon Fulton, from Portadown, has thanked the doctors, nurses and all of those on the frontline at Craigavon Area Hospital whom, she says, without a shadow of a doubt, saved her from certain death.

Now starting her long journey back to health, Sharon has thanked everyone for their prayers as she lay in intensive care in Craigavon literally struggling and gasping to stay alive.

“God answered the prayers and I thank God every day for putting me in a hospital with such a dedicated team,” said the eternally grateful wife, mother and grandmother.

In an emotional account of the traumatic time which Covid-19 wrought against Sharon and her family, she has opened up about how she came to be diagnosed.

She told of the agony of being parted from her loving husband David, as they had not spent a night away from each other in 22 years of marriage.

And Sharon revealed she said goodbye to her daughters and asked that they would not allow her grandchildren to forget her when she was gone.

For close to two months she has fought with every fibre of her being, nurtured by the love of her family and the prayer and support of friend and stranger alike.

It all began in March – Wednesday, March 25 to be precise – a dreadful day which Sharon can vividly recall.

The 47-year-old was rushed to Craigavon Area Hospital after her husband phoned 999.

She told Armagh I : “I was in ICU for a short while then went to the Covid-19 ward where I went downhill very fast.

“My husband told me after I came home that he got a call from the consultant and we had a three-way conversation that if I wasn’t ventilated soon I would die. I can’t remember any of this.

“I also phoned my four daughters and basically said goodbye and not to let my three wee grandchildren forget me if it I didn’t make it.

“I can’t remember doing that, but I can remember going down in the lift to theatre to be sedated and looking at the theatre lights. I was terrified and was shaking. That was me on the ventilator for three weeks.

“After 12 days my family were told I had 12 hours to live, but I turned a corner very slowly and, after three weeks, I woke up on the Covid-19 ward.

“That was one of my lowest points as I didn’t know where I was. Everyone had masks on and visors and were dressed in protective clothes.

“A nurse explained I was in hospital and I had been critically ill in ICU and ventilated for three weeks.

“I couldn’t stop crying. They told me I had the coronavirus which I hadn’t a clue what they were talking about as, when I went in, there were only a small number of cases.

“I couldn’t understand why my husband wasn’t there until they explained that the hospital, and everywhere else, was in lockdown.

“I was in the Covid-19 ward for a further two weeks and never saw my family and they didn’t see me for five weeks in total. That was one of many more lows to come. I spent a week in the ‘red’ Covid ward. I couldn’t move. I couldn’t move, lift my hands, arms or anything. I depended on the nurses for everything.

“At first I had to be fed – that’s how bad it was. Once I was fully alert and could eat and drink myself it was still so hard to even lift a cup of water.”

Despite the sheer horror and the effects that the illness were having on Sharon physically, the emotional pain was also over-powering.

But over-powering too was the kindness, the care, the commitment, compassion and dedication of the magnificent medics who were there with her through it all.

Sharon continued: “My lowest point was not being able to see my husband or our four daughters or our three wee grandchildren and also realising just how weak my body was.

“I was then moved to the amber Covid-19 ward which was dealing more with rehabilitation.

“I was Covid positive for three weeks and when I was first moved to the red Covid-19 ward, all those doctors and nurses were putting their lives in danger to help people like myself.

“I was tested twice in the amber ward and was negative on both occasions.

“I’m 47 and the doctors thought with my age that I would be only on the ventilator a few days but this virus can completely wipe you off your feet, like it did with me.

“The virus went through my body and with being heavily sedated for three weeks I couldn’t even get out of a chair. The physios had to help me learn how to do that again and, believe me, every part of me screamed in pain as I had to build up muscles that hadn’t been used in five weeks.

“I also couldn’t walk at all and I cried with happiness and was so overwhelmed when I took my first few steps with a Zimmer frame. I also cried at the thought of having to use a Zimmer frame long term – no-one could tell me anything for definite because the virus was so new.”

Sharon continued to make improvement slowly and her progress was sufficient to allow her to leave hospital – complete with her Zimmer frame – almost three weeks ago, on April 27 to be precise.

To say it was an emotional day would be under-stating it immensely.

There to surround Sharon with their love and rejoice in her return were her husband David (53), her mum and dad, her daughters, aged 17, 21, 25 and 27, and her three adorable grandchildren – doting granddaughters, aged four and six, and beautiful baby grandson, just six months old.

“It was the first time I’d seen my husband in five weeks,” added Sharon.

“Coming home was so good and I cried happy tears for the first time in weeks when I saw my daughters, my two granddaughters and my wee grandson – and my husband, who I had cried down the phone to on many nights as it was so hard spending all that time apart. We were married 22 years in March past and have never spent a night apart.

“When I got home I was told about all the prayers that were being said for me, which started with my family, then our Church, Edenderry Memorial Methodist Church in Portadown, led by Rev Alan Wardlow, and it rapidly spread to prayer chains all over Ireland, both North and South, England, Wales and America.

“God answered the prayers and I thank God every day for putting me in a hospital with such a dedicated team.

“Craigavon Area Hospital is so prepared for Covid-19, from the doctors, nurses and the whole team that I know I couldn’t have been in better hands.

“In the two weeks since I got home I have managed to walk without my walking aids.

“Now I have a long road in front of me but I’m determined to get to reach the end.”