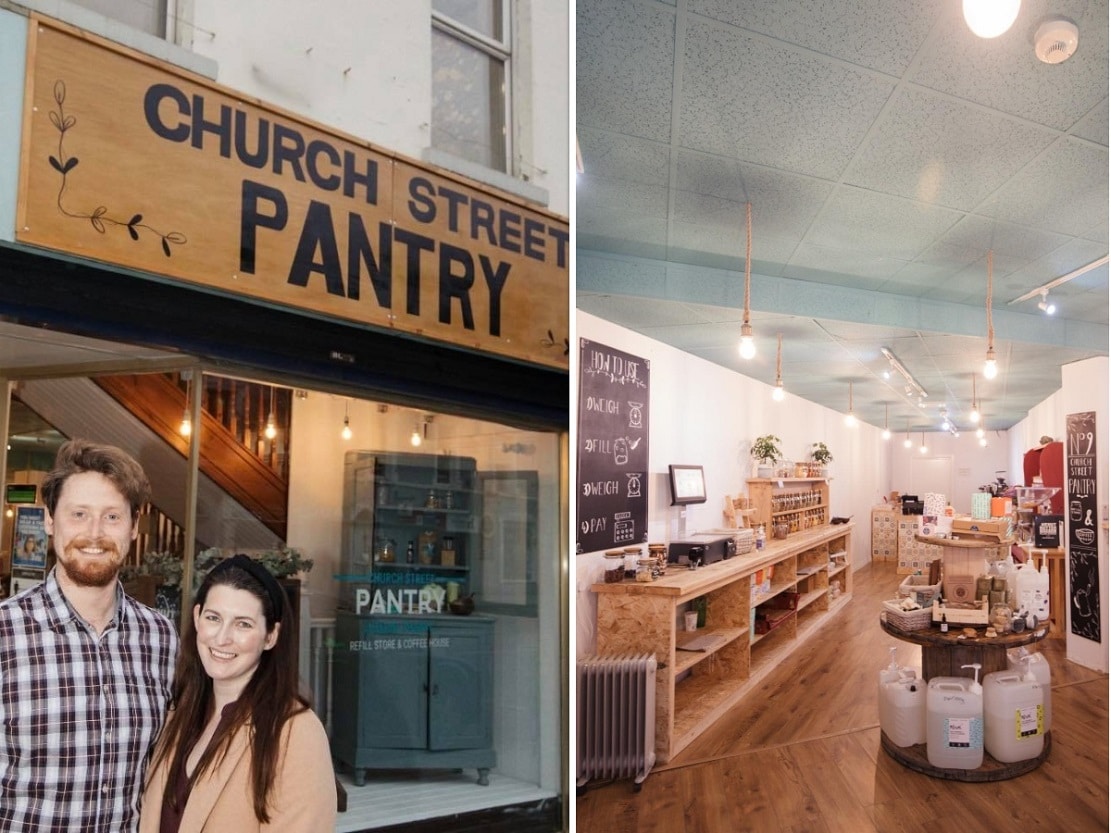 The current pandemic has led many to perform a career pivot and just one example is a Portadown couple who have realised their dream by opening a refill store and coffee shop.

Speaking to Armagh I, Nicola revealed that it was a ‘what would you do if you could do anything’ conversation with her partner last summer over a coffee that sparked this new business venture.

The 36-year-old pre-pandemic had been a self-employed estate agent with Purple Bricks.

Meanwhile, David returned in the summer after being stuck in New Zealand due to the pandemic after what was meant to be a few months work.

Nicola said: “A number of years ago I had come across, scrolling through the internet, a couple of girls who were doing it from an electric van over in England.

“I remember thinking it was a great idea. I would be environmentally conscious anyway. I hate going into the supermarkets and everything is wrapped in plastic. Typically if I can’t buy it loose then I will go without.”

After a ‘if you could do anything what would you do’ conversation with her partner, Nicola commented:  “Mine was to set up a refill store.

“Obviously by this stage there have been a few that have popped up here, with Refill Quarter in Belfast and Inspire Wellness in Banbridge.”

After divulging this desire to David, all hands were on deck as the pair began to research and look into setting up such a store.

Nicola admitted: “If I had been employed, I probably would have been more cautious but I was working for myself and I thought I may as well make the leap and go for it.”

With David’s background in hospitality, the couple looked to combine this with the idea of a refill store by introducing a coffee shop element.

Nicola said: “We do takeaway coffees at the moment but plan to increase. We are in a building where we have got three floors so we have big plans. We want it to be a community-centered shop.

“David would love to get a few live music sessions, there could be book club meets. We want to make use of the space as much as possible so that people can gather when Covid and the rest of the world allows us to.”

According to Nicola, the pandemic has “taken the shine off” going to the local supermarket for many members of the public.

“People enjoy coming in here,” she said. “We are a smaller shop, we are limited to numbers so there are not as many people, so everyone can take their time, have a browse and buy as little or as much as they need.”

As well as tackling the battle with plastics, Church Street Pantry has also honed in on cutting down on food waste.

Nicola said: “You don’t need to buy a full bag of something that you are only going to use half a bag of, especially with the likes of herbs and spices.

“If you are trying a new recipe with a lot of ingredients you can come, get the spices you need, take it away, cook it and see what you think, without having to clutter your cupboards with spice jars that you use once then sit in the cupboard for years until it’s out of date and needs thrown out.”

From being the mother of two girls, Nicola believes that their generation will be demanding more and more of this type of shopping experience.

“We have had such a mix of customers, from young to old,”she said. “People enjoy coming with their children, picking out dried fruit for snacks during home schooling.

“Then you have the older generation who say they remember shops like this where every item was weighed and it brings back a bit of nostalgia.”

When trying to find suppliers, Nicola commented that some they had initially sourced pricing with had suspended deliveries to Northern Ireland or drastically increased delivery charges.

She explained: “Unfortunately it is quite hard to get some of these goods in Northern Ireland, then Brexit hit and a lot of deliveries from the companies in England were suspended.

“We found a supplier in the Republic of Ireland that could supply us with moth of the dry food goods and continue to source stock as locally as possible”.

Nicola said:”It’s really important to us to showcase suppliers where possible and have stock from producers such as Burren Balsamic, Long Meadow Cider and Harnett’s Rapeseed Oil.

“We use Ballylisk milk for our coffee’s, sell organic eggs from Chapel Lane in Armagh and have sourdough bread from Grain Bake House at the weekends.”

Alongside the food items the Church Street Pantry also have organic soaps from Elemental Earth and Sage smudging sets from Sage & Rose.

They have also begun welcoming smaller businesses to have their goods sold in store.

Nicola stated: “We get granola from Jacqui Jolmes who is based just outside Bleary, which I can’t keep enough of! We run out on a weekly basis, people just love it and we are so glad to be able to support a business as small as her’s.

“We have such a resource of local suppliers and many of those suppliers have returned the support by coming and shopping with us.” The business also had a helping hand from the community in getting started with a crowdfunder raising a total of £4,345.

Nicola said: “It was very successful, we asked friends, family and the wider public to help. The generosity, feedback and response really spurred us on.”

The store opened its doors on a cold and snowy Saturday in February and Nicola said the “support has blown her away”.

“The first day we opened it was snowing, we had been let down on having the sign put up on the Friday, so we had a bit of a Facebook SOS with David and another man putting up the sign at eight o’clock on Saturday morning!

“It was amazing, there was someone there at the door, first thing as we opened. The following Saturday was torrential rain and wind, but people have been so supportive and we are incredibly humbled by the response.” Another key component of the business is the provision of vegan and gluten free products.

Nicola commented: “We saw a gap in the market, so we have been home-making, putting the gluten free flour and grains to use. The baked goods have been flying out, we sold out of pancakes on Pancake Tuesday by 11 o’clock!

“We have had so many people coming to us with a husband or wife who is gluten free and is fed up of the pre-packaged cakes which are normally not very nice.”

Looking forward, Nicola said she cannot wait for the full service of the Church Street Pantry to open to the public.