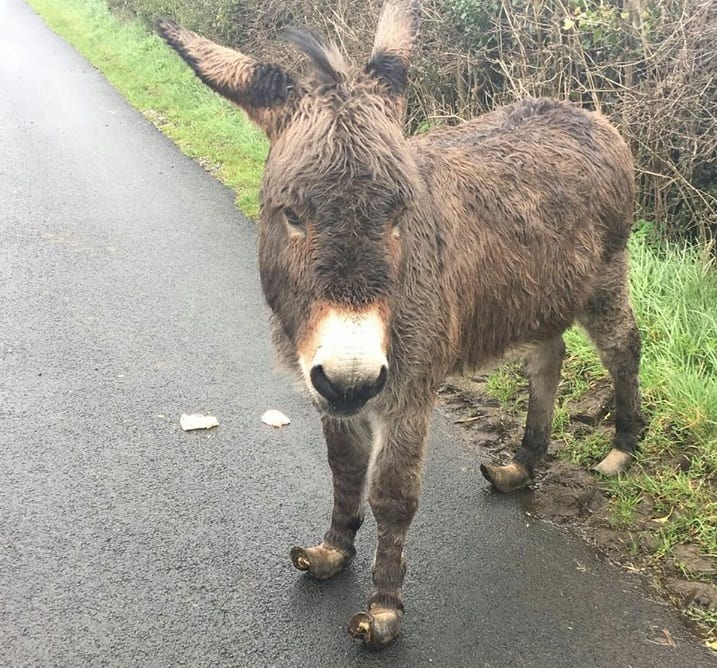 After the PSNI Craigavon released this picture this evening, Facebook was awash with angry, and somewhat vitriolic, comments.

The responses weren’t hitting out at the PSNI, but rather the negligent owner, or lack of, which looks like the case. This donkey was reported to be a hazard to the public.

The PSNI’s post stated that they were called to the Drumanphy Road, Portadown yesterday following reports of a donkey being loose on the road causing a danger to motorists.

However, “on arrival we came across this lovely chap who unfortunately has some very sore feet with some badly overgrown hooves. We are keen to speak to the owner or to anyone who can help us identify the donkey or where it came from,” it read.

The post, which has already been shared over 120 times, garnered some strong feedback.

Angie said: “Owner should be locked up for animal cruelty. Poor donkey.”

Gary added: “There is more than one donkey wandering the country with feet like that. It’s unfortunately more common than you think. Same goes for many other pets out there and the authorities are basically powerless to deal with it properly.”

Catherine continued: “Poor donkey! The alleged owners should be ashamed of themselves. I’m glad the donkey it now safe and receiving proper care.”

Michelle was pushing for a jail sentence..”Aw look at its wee feet! Whoever owns that needs a good talking to.”

Tom had a point: “This is terrible owners should be fined and banned from having animals.”

Police are keen to find the owner. Anyone with information please contact Police in Lurgan on 101 quoting serial 530 of the 26/03/16.