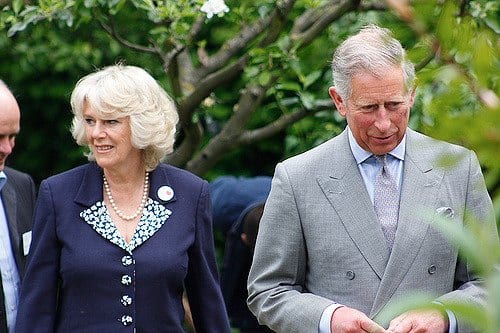 The Prince of Wales and Duchess of Cornwall have arrived in County Armagh on the second day of a three day visit.

The Royal couple are visiting a number of local businesses in connection with the Northern Ireland Year of Food and Drink.

Crowds have gathered in the centre of Portadown this lunchtime, and were delighted when Prince Charles took time for a walkabout.

The Royals, in the first joint visit of the day, have attended the award-winning Yellow Door Deli in the town, where they met excited children from Portadown Integrated Primary School.

The second engagement saw the special guests given a tour at the Ulster Carpets factory on Garvaghy Road, before it was on to the Armagh Cider Company, a thriving local company whose delicious product comes from the Orchard County’s humble bramley.

The company also has expansion plans in the pipeline and is aiming to open a new cafe on site and tasting area for visitors. The Duchess enjoyed sampling some of the delicious cider produced and was appreciative of the craft and work which goes into producing it.

Two weeks ago,the Prince attended an event at Fortnum and Mason in London to promote Northern Ireland food produce, as part of his work in supporting the food and drink sector, which is the Province’s single biggest industry.

A further stop on the official itinerary this afternoon saw a Royal visit to the recently-opened Orange Museum at Loughgall. The visitors arrived to the sound of Lambeg drums being played.

First Minister Arlene Foster and Lord Caledon, the Lord Lieutenant for County Armagh, were both in Loughgall for the Prince’s arrival.

The Prince of Wales tours the Museum of Orange Heritage in Loughgall and meets well wishers. #RoyalVisitNI pic.twitter.com/qWzAjxTF1r

The County Armagh diary will be followed by a musical evening hosted at Hillsborough Castle tonight.

Prince Charles was joined today (Tuesday) by the Duchess of Cornwall on the second day of the visit.

This morning he had a number of engagements in County Down, and was presented with a hurley and sliotar by members of Portaferry Gaelic Athletic Club.

On Monday, the Prince of Wales visited The Institute of Electronics, Communications and Information Technology (ECIT) at Queen’s University Belfast. Earlier this year he awarded CSIT a Queen’s Anniversary Prize for Higher and Further education.

Tomorrow (Wednesday), the three-day visit will conclude in County Donegal.

The visit to Ireland is at the request of the British Government and follows a visit by Their Royal Highnesses in May last year.

The Prince and Duchess’s second official visit to Ireland follows the State Visits of Her Majesty The Queen to Ireland in May 2011, and of the President of Ireland, Michael D Higgins, to the UK in April 2014.

In Donegal Town, Their Royal Highnesses will celebrate the area’s heritage by visiting Magee’s – a local company which has been producing tweed in Donegal for 150 years.

At the Letterkenny Institute of Technology, The Prince will meet local entrepreneurs and learn more about the institute’s cross border programmes, while the Duchess will visit a local school.

Finally, at Glenveagh Castle, they will tour the gardens and meet children who have been learning about some of the conservation work which takes place in the National Park.

The Duchess tries some cider which has been made in Northern Ireland at Armagh Cider Company. #RoyalVisitNI pic.twitter.com/QMkVfyWStS

The Prince has been joined by The Duchess for the #RoyalVisitNI, and TRH’s first joint visit is to @yellowdoordeli! pic.twitter.com/HAJVQ5IOhw