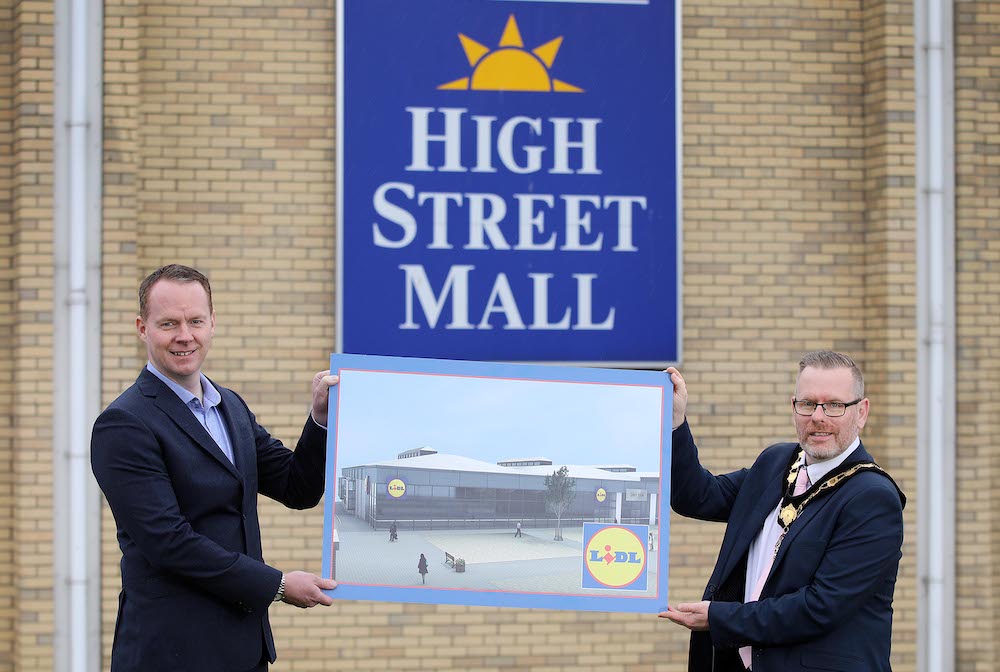 Portadown is on track for a major new retail investment after Lidl Northern Ireland confirmed its brand new £6 million store will open at High Street Mall in Spring 2021, creating 20 permanent new jobs and supporting up to 100 more through the planning and construction phases.

The new Lidl Northern Ireland store is in addition to a £4 million transformational investment and re-development of the popular town centre shopping destination which will also include a new layout, enhanced parking, greater town centre access and a new central plaza.

Northern Ireland’s fastest-growing supermarket said its plans for Portadown were part of a continued investment in the Armagh City, Banbridge and Craigavon area and right across the region. It already has stores in Armagh, Craigavon, Banbridge and Lurgan (and Portadown).

Lidl Northern Ireland Regional Director, Conor Boyle, said: “Portadown is a confident, forward-looking and highly popular retail destination and we’re delighted to confirm our new opening plans at High Street Mall which offers us a unique opportunity to be the anchor for new growth while also becoming part of the town’s continued regeneration in an outstanding location.”

Lidl Northern Ireland is already a major direct and indirect local investor. In 2018, as part of an independent economic assessment, it confirmed that it sourced more than £100 million of local food produce for export from the borough – twice that of any other borough in Northern Ireland – while also being among one of its largest employers.

“Strategically located with excellent links in an attractive setting, it’s no surprise that Portadown continues to attract investment even in challenging times,” said Councillor Savage.

“Its commitment to business and community is a testament to its success and the reason why its award-winning high street is among the best in the UK and Ireland. I’m delighted that Lidl Northern Ireland has chosen Portadown as part of its latest expansion and by the redevelopment plans which will further complement the town’s renewed growth and vibrancy.”

Earlier this year, Lidl Northern Ireland also confirmed it had struck a new partnership deal with Portadown-based horticulturalist Greenisland Flowers which will ship more than four million stems of freshly cut tulips, lilies and scented stocks to its 202 stores in Ireland and Northern Ireland.

With over 40 employees, the Portadown-based company which has two sites across six hectares in Craigavon has been growing retail-ready fresh flowers for over 18 years and this latest contract will take its longstanding relationship with Lidl Northern Ireland up to 2022.