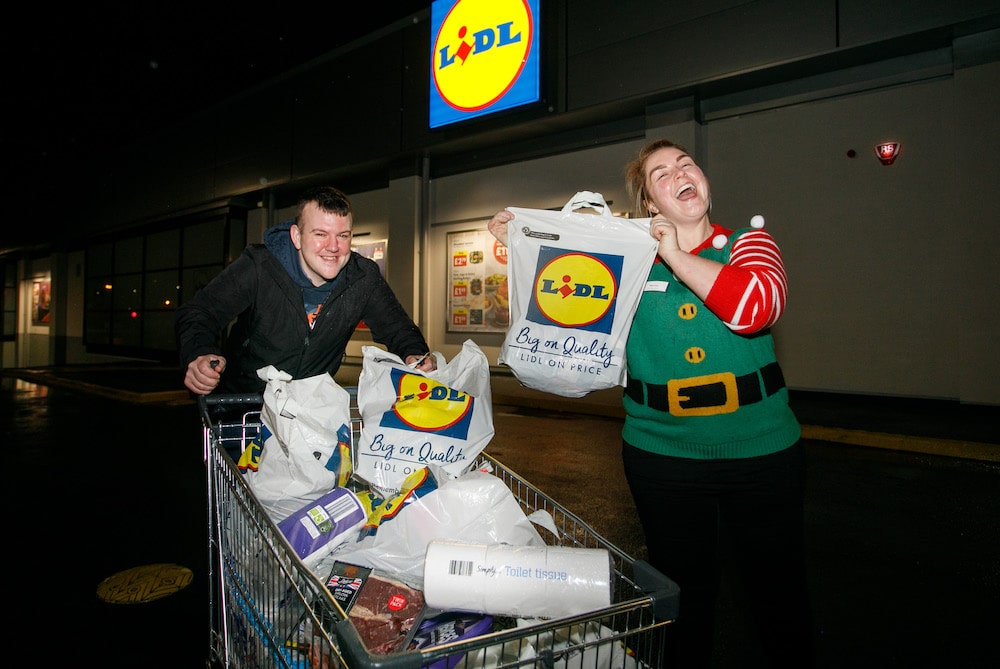 Shoppers across the region were swept up in festive fever with the return of Lidl Northern Ireland’s Trolley Dash on Saturday, which saw lucky customers run their very own supermarket sweep and bag their Christmas shopping for free – all whilst raising vital funds for charity partner NSPCC Northern Ireland.

41 winning shoppers (one for every Lidl Northern Ireland store) won their spot to dash around their local Lidl store, racing against the clock to bag as much of their Christmas food shop for free as they could in just two minutes.

Lidl Northern Ireland shoppers in Co Armagh raised over £6,865 including winning customer James Herron who took part in the dash at the Lidl Portadown store walking away with a festive feast worth £238.77!

Now in its seventh year, the Trolley Dash initiative raised a staggering £93,000 for charity partner NSPCC Northern Ireland which will help fund the delivery of services for children in need right across the region. Gordon Cruikshanks, Head of Sales Operations at Lidl Northern Ireland, commented: “Trolley Dash continues to be our flagship fundraising event for our charity partner, NSPCC Northern Ireland and this year our customers really have gone above and beyond with their generosity and support. We’re delighted to have raised over £93,000 to help fund NSPCC’s incredible services, particularly at a poignant time of the year when there are many children in need of help and support.

In October 2020, the retailer announced the second extension of its charity partnership to 2022 committing to new fundraising target which they aim to surpass.

“Christmas can be the most difficult time of year for young people suffering abuse and neglect, or poor mental health. After another difficult year, we’re here to support all children who need the support of our specialist services, or simply someone to talk to. Staffed by our keyworkers and volunteer counsellors, NSPCC’s Childline services are here for everyone 24 hours a day, seven days a week, even on Christmas Day.

We’ve been working with Lidl Northern Ireland since 2017 and the support we’ve received from Lidl and its wonderful customers right across Northern Ireland has been incredible. We’re overwhelmed with the response we had to this year’s Trolley Dash and I’d like to thank everyone who entered the competition and helped support us at a time of year when we are needed the most.”

Trolley Dash is just one of many initiatives by Lidl Northern Ireland to fundraise for NSPCC and engage customers and local communities with in-store activity. A special Lidl Elf Factory pop up event was also held on Saturday 11th December in aid of the charity at the Lidl Castlebawn Road store in Newtownards, where children were invited to stuff and name their own elf toy, create a special Christmas decoration and write and post their letter to Santa.