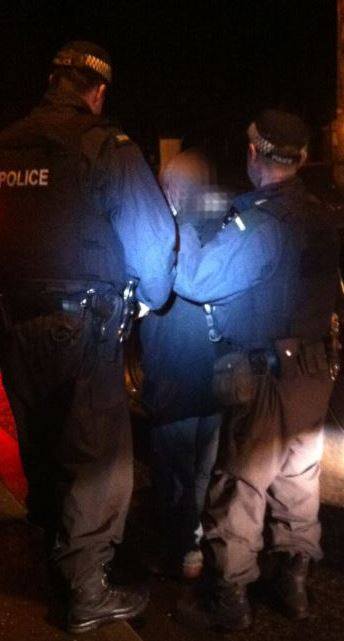 The picture shows the moment police apprehended a man as he tried to force open the rear window of a house in County Armagh.

The man was arrested after officers from Tactical Support Group and Craigavon Local Policing Team attended to a report of suspicious activity at a house in Portadown.

When they arrived at the property on the Killycomain Road, they found the man trying to force open a window at the rear.

Police say he was subsequently arrested and will now face prosecution for attempted burglary. The operation will run for four weeks and cover every part of Northern Ireland.

Officers from Districts and detectives from Reactive and Organised Crime Branch will work alongside colleagues in Tactical Support Groups and Roads Policing to raise the visible police profile against burglaries and burglars.

This will involve mounting vehicle check points, conducting searches at premises of interest, deploying cash sniffer dogs and providing advice and information to householders and business owners on how to secure their premises.

Provisional figures indicate there have been 7,266 burglaries, at both domestic and business premises, in the period between 1 April 2015 and 25 January 2016.

This is an increase of 2.1 per cent on the same period the previous year when 7,119 burglaries were recorded.

Superintendent Simon Walls, PSNI lead for burglary, said: “Burglaries are a violation of the things people hold most dear – the possessions they’ve worked hard to buy and to enjoy as well as the items of sentimental value they cherish.

“Over the coming weeks, police intend to have a higher profile in communities, making sure any burglary hotspots are receiving increased attention. As part of the overall operational plan, we will also be mounting checkpoints on roads to clamp down on travelling criminals. There will also be liaison with our colleagues in An Garda Siochana.

“The main motive for most burglaries, whether of domestic or commercial premises, is taking goods which can be turned into cash. We will be paying attention to locations where goods may be exchanged for cash and we will be deploying sniffer dogs to search buildings and vehicles which we suspect may be used to store or transport the proceeds of crime.”

While police will be increasing their operational activity against burglars, Superintendent Walls said people in communities could go a long way to protecting themselves, either as householders or owners of business premises, by taking some basic crime prevention steps.

Superintendent Walls said: “On many occasions, it’s so frustrating for burglary victims and for police to see how easily the thieves got into their properties.

“I would strongly urge anyone who has a property that they do not take its security for granted. When you leave the property, make sure all the doors and windows are locked and secure and always keep your keys safe.”

Businesses can reduce the chance of being targeted by burglars by adopting some or all of the following crime prevention measures:

Strengthen potential entrances and exits – check the state of all entrances (doors, windows, skylights) to your building. Most businesses invest in securing the front of their premises but sometimes forget about the back doors, broken windows or the side door no one uses. Consider installing safety grills and deadlocks to exterior doors and windows, and installing sensory lighting. Ensure someone is responsible at the end of the day to check everything is locked. It is also worth reinforcing windows or installing window locks that cannot be reached and unlocked if the glass is broken.

Alarms – an alarm can act as an excellent deterrent. Without one, your premises will present a more attractive target for burglars than those with a system fitted. It is important that alarm systems are inspected regularly.

Stock/equipment – stock should be kept to a minimum and locked away in a secure room where possible. It is also always advisable to keep minimal cash on the premises and to keep it locked away securely in time delayed safes. You should also consider the equipment you use; if it’s valuable, make sure it is secured.

Staff – train your staff about burglary prevention and inform them about any security measures you have installed and how to correctly operate them. Explain to staff the importance of keeping a watchful eye for suspicious people or vehicles.

Superintendent Walls said: “Any measure which business people can put in place to protect their property and livelihood is a good investment. Local crime prevention officers can also be contacted for further advice.”

Superintendent Walls said: “We are continually striving to increase clearance rates and we believe that our focused patrol, prevention and investigative activity over the coming weeks will help to improve these figures.”