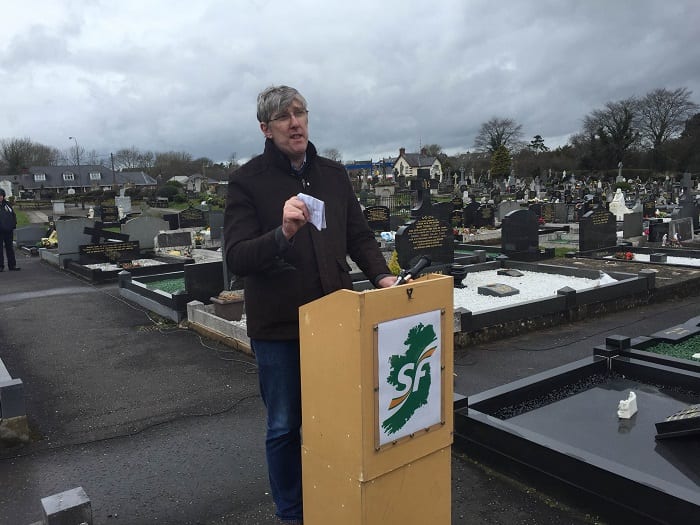 Sinn Féin MLA for Upper Bann John O’Dowd was the main speaker this weekend (Saturday) at the annual Easter Commemoration in Portadown.

Speaking at the graveside of local woman Julie Dougan, Mr O’Dowd said that over the past 100 years republicanism has seen many inspirational women.

“During Easter Week and in the 100 years since, Republicanism has seen some inspirational and formidable women, and men, and Julie Dougan is to the forefront of those. A community activist, a trade union activist and a republican activist, in many ways Julie Dougan represents the easily understandable legacy between 1916 and the most recent phase of struggle in Ireland,” he said.

Mr O’Dowd continued: “Thomas Mac Donagh, a signatory of the 1916 Proclamation, said that documents such as that don’t die and 100 years on it is clear that the ideals and ideas of the leaders of 1916 live on. The goals of ‘cherishing all the children of the nation equally’ and of national independence are still very much alive, unfinished business.

“There is now a peaceful way to achieve republican objectives and we must grasp that opportunity with the same commitment and vigour that drove people like Pádraig Pearse, James Connolly and Julie Dougan.

“On the 5th May we face an Assembly election, where Sinn Féin are challenging for two seats in the Upper Bann constituency. Winning two seats in this area is the next big contribution we all can make to the campaign for a fairer society and a Border Poll referendum on a United Ireland.