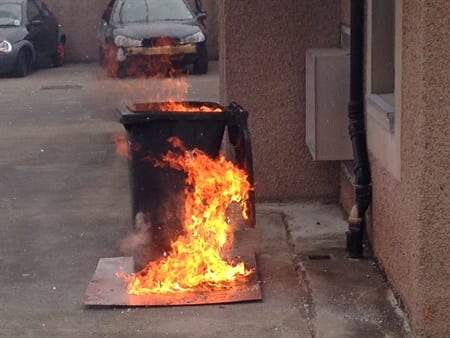 A child had to be taken to hospital as a precautionary measure after wheelie bins were set on fire in the Birches area of Portadown.

It was one of a number of incidents which happened over the weekend and police – who believe they may be linked – are appealing for information.

Police received a report that a number of wheelie bins had been set on fire outside a house at around 7am yesterday (Saturday).

Extensive fire damage was caused to insulation within the property.

Smoke damage was also caused to the front of the property.

There was a woman and two children in the house at the time of the incident. One of the children was taken to hospital as a precautionary measure.

At approximately 7.10am police received a report that a portable toilet had been set on fire at a building site.

And later, at around 1.35pm, police received a further report that a window had been broken at a house in the Clonmakate Road area of Portadown.

Anyone who has information about any of these incidents to contact detectives at Reactive and Organised Crime, Lurgan on the non-emergency number quoting reference numbers 248; 253 and 599 12/11/16.