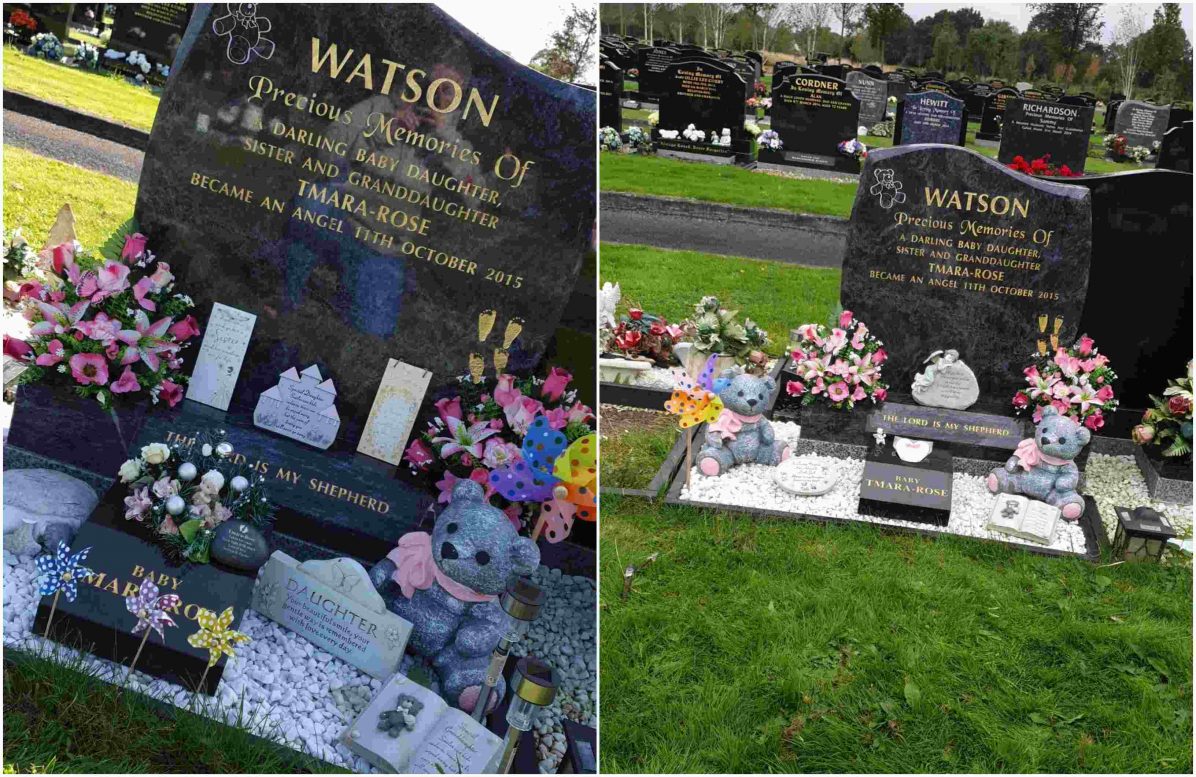 A grieving mother who lost her baby girl at birth says heart has been “ripped to pieces” after despicable thieves snatched treasured items from her daughter’s grave.

Kelly Watson, who lives in Laurelvale with her partner Chris, lost her baby Tmara-Rose less than half an hour after giving birth almost four years ago.

But over the weekend the 31-year-old was left devastated once again when she discovered the items missing from the graveside in Kernan Cemetery she visits regularly.

Solar-powered lights, several plaques and a round black stone with Tmara-Rose’s name and a verse inscribed on it were swiped.

Kelly, who has three other children – a 12-year-old boy and two girls aged 10 and five – says the items may be replaceable but the callous act has left her despairing.

Speaking to Armagh I, Kelly said: “It’s going to be hard enough in two weeks time when it would have been Tmara-Rose’s fourth birthday, but we’re now afraid to lay flowers and gifts for fear they will be stolen again.

At 23 weeks pregnant Kelly was told her little girl was suffering from Congenital Diaphragmatic Hernia (CDH) – a rare illness.

“Our little baby only lived a short 28 minutes but for us they were precious moments with our daughter,” she said.

Since the incident, Kelly says she has been keeping a vigil at her daughter’s grave at night, sometimes staying hours at a time.

“I have been back and fourth at night time in pitch black checking on the grave,” she said.

“If I could I would stay out all night but I also have three other children who need me; I couldn’t have got this far without my three kids knowing they need me.

“But the heartache never leaves me, it sticks with me everyday that I couldn’t save my baby.”

She added: “From here on in I will be checking my baby’s grave and loved ones’ graves if I can every evening. This can’t be happening; we do our best to do what we can for a baby as it’s all we have left, her graveside and my memories with her.”

“I’ve four kids, not three, and just because my Tmara-Rose isn’t here doesn’t mean she won’t get for her birthday or Christmas. My kids will be my priority through everything.”

Of those responsible for the theft, Tmara-Rose said they are lowlifes, to carry out such “a sick” act on a baby’s grave.

A spokesperson for Armagh City, Banbridge and Craigavon Council, who manage the cemetery, said: “We are very sorry to hear of this distressing incident and would offer our sympathies to the family involved.

“We would wholeheartedly condemn theft from any grave within our cemeteries and would appeal to those involved to return this important memorabilia.

“The cemetery is manned during the day, however as most people will understand cemeteries are large, open sites which cannot be fully monitored continuously.

“As this is a theft of personal items we would urge the family to report this matter to the police.”