Four men caught by ‘Tache Police’ but raise more than £5,000 for charity 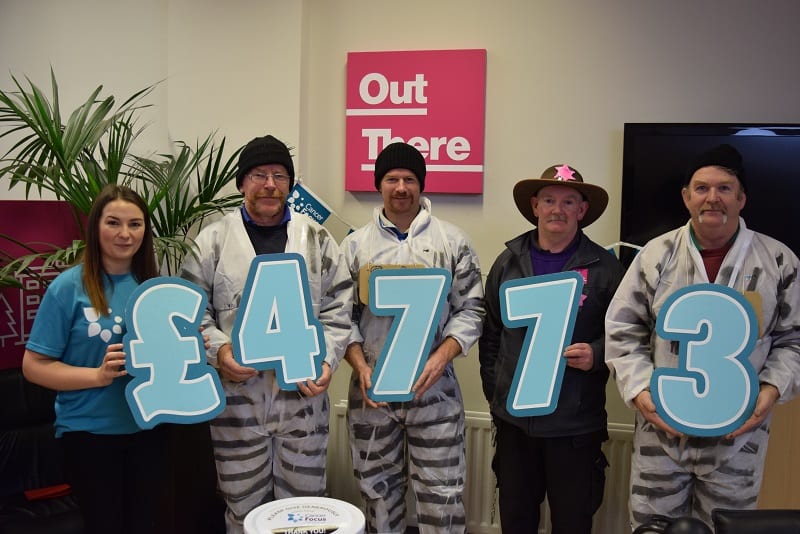 Four county Armagh men have helped their company Out There Services raise just under £5,000 for Cancer Focus Northern Ireland by taking part in ‘Tache for Cash’, growing moustaches during the month of November.

Caught by the ‘Tache Police’ and dressed as inmates, Colin Alexander, Nigel Farrell, Jim McCaughey and Patrick Nugent came in costume to the big finale held at Out There’s head office in Templepatrick.

The men work in one of Out There Service’s 9 depots across Northern Ireland, based in Portadown.

They were four out of 25 volunteers who took part, winning best fundraising depot, raising over £1,162.

Out There are Northern Ireland’s largest Grounds Maintenance and Landscaping Contractor, with over 250 employees.

The entire company all got involved in this event to ensure their financial target was achieved for Cancer Focus.

They also reached out to family and friends, as well as customers and clients. The men’s efforts were picked up by local media through Out There’s social media coverage of the men’s journeys throughout the month.

Managing Director Steven Thompson commented: “We hold contracts working in communities all over Northern Ireland every single day, and we pride ourselves in giving something back to those communities that we work in”.

Out There Services have raised over £11,000 in 2016 for their two selected charities Cancer Focus NI and Cardiac Risk in the Young (CRY). An Out There team took part in the Prudential Ride 100 in July, raising over £6,000 for CRY.

Rosie Forsythe of Cancer Focus Northern Ireland, said “We are delighted with the amount of cash that has been raised- the effort that staff at Out There Services have gone to is amazing and we really appreciate their hard work.

The money raised will help keep our Man Vans on the road, bringing vital health checks to men in local communities, sports venues and workplaces all over Northern Ireland”.