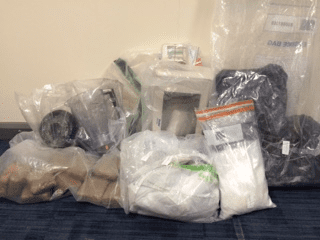 Police tonight confirmed the drugs seized during an operation in the Portadown area yesterday (Wednesday) had an estimated street value of almost £750,000.

Detectives from Reactive and Organised Crime Branch seized 4.5 kilos of cocaine along with 10 kilos of benzocaine, which can be used as a mixing agent to increase the amount of cocaine available for sale. Police have issued a photo of some of the items, including cocaine, seized in the operation.

Two vehicles and five properties were searched in Portadown and Craigavon yesterday afternoon.

Two men, both aged 32, have tonight (Thursday) been charged with possession of a Class A drug and possession with intent to supply.

They are due to appear at Craigavon Magistrates’ Court in the morning (Friday).

The officer leading the investigation, Detective Inspector Alan Pyper said: “We believe we have taken a substantial quantity of cocaine out of circulation and removed a significant amount of drugs manufacturing equipment including a cocaine press and blenders.

“Our enquiries are continuing, as does our commitment to taking drugs off the streets and putting those involved in this activity before the courts. I would encourage anyone with information about illegal drugs activity to contact police. We will act on your information.”