Edgarstown bonfire set alight in ‘an attempt to raise tensions’

Police have said they are treating the incident as arson 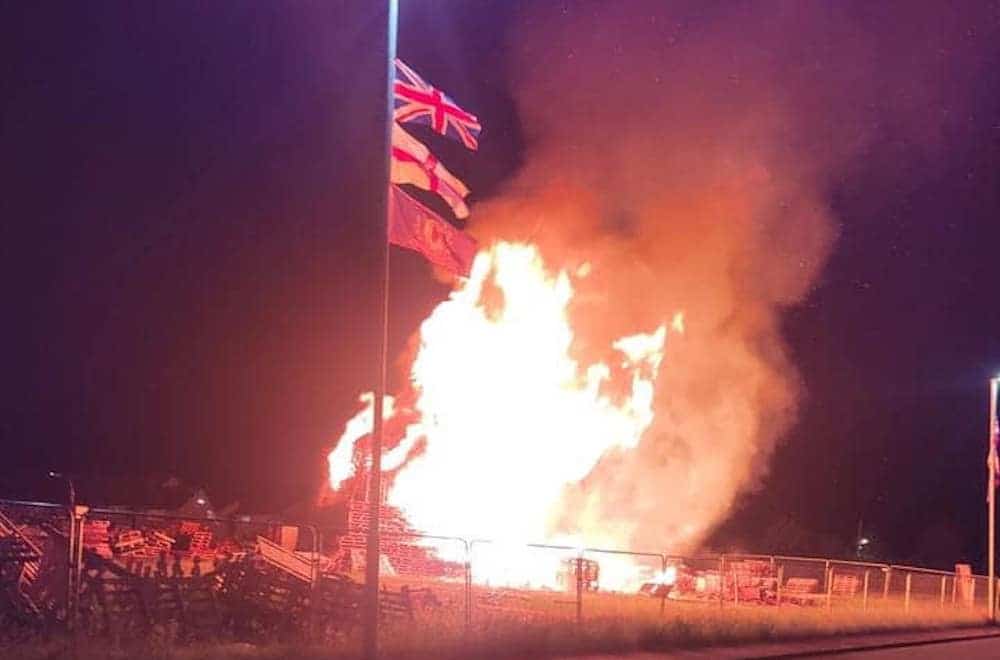 There has been condemnation after Edgarstown bonfire in Portadown was set alight in the early hours of this morning (Thursday).

The Fire Service was called to the blaze around midnight.

Portadown DUP councillor Darryn Causby said there was no doubt it was “an attempt to raise tensions and shows the level of intolerance that exists in some quarters for unionist/loyalist traditions”.

He said: “I wholeheartedly condemn this attack not only because it’s an attempt to raise tension but because it put the community at risk.

“As we approach the bonfire season I appeal for calm and restraint in the face of blatant provocation.

“I have no doubt that the malicious burning of this fire will only ensure that there is a greater unity within the unionist/loyalist community.

“It is now time for all political leaders to condemn this act and appeal for calm.”

Meanwhile, Portadown Orange District LOL No 1 has also condemned what it described as “the blatant, sectarian attack”.

In a statement on its Facebook page, it said: “This attack has been orchestrated by those from the nationalist community who wish to raise tensions in the town in the run up to the July celebrations.

“We call upon all political leaders to come out publicly and condemn this sectarian attack on our unionist traditions and culture and the local community, and call upon the PSNI to open an investigation immediately and bring those responsible to justice.

“We hope at this time that the unionist community will pull together and help out the bonfire builders in Edgarstown who have put a lot of effort and work with the bonfire and decorating the town, with whatever they can to build back the bonfire again.”

In a statement, the Loyalist Edgarstown Bonfire group said the attack had strengthened their resolve to rebuild the bonfire within the next few days.

They said: “Our thanks go out to the NIFS who made a swift response to our call, unfortunately too late for our main build but helped save our surrounding materials which are now very thin on the ground.” Sinn Féin councillor Paul Duffy said: “No one should take any action which puts lives and property at risk.

“There is a responsibility on all elected representatives and community leaders to do all in our power to reduce community tensions.

“The cause of the fire has yet to be established. However, if this was a deliberate attack it was reckless and irresponsible.

“There is an onus on all of us to ensure that the responses to incidents like these do not raise tensions or point the finger at whole communities which could in turn put others at risk.” In a statement, police said they were treating the incident as arson.

They received a report around 12.20 am that bonfire material in the Union Street area had been set alight.

“NIFRS attended and the fire was subsequently extinguished,” they said.

“The incident is currently being treated as arson and enquiries are ongoing. Police would appeal to anyone with any information to contact 101 quoting reference number 34 of 23/06/22.

“A report can be made using the online reporting form via www.psni.police.uk/makeareport. Information can also be provided to Crimestoppers anonymously on 0800 555 111 or online at www.crimestoppers-uk.org.”