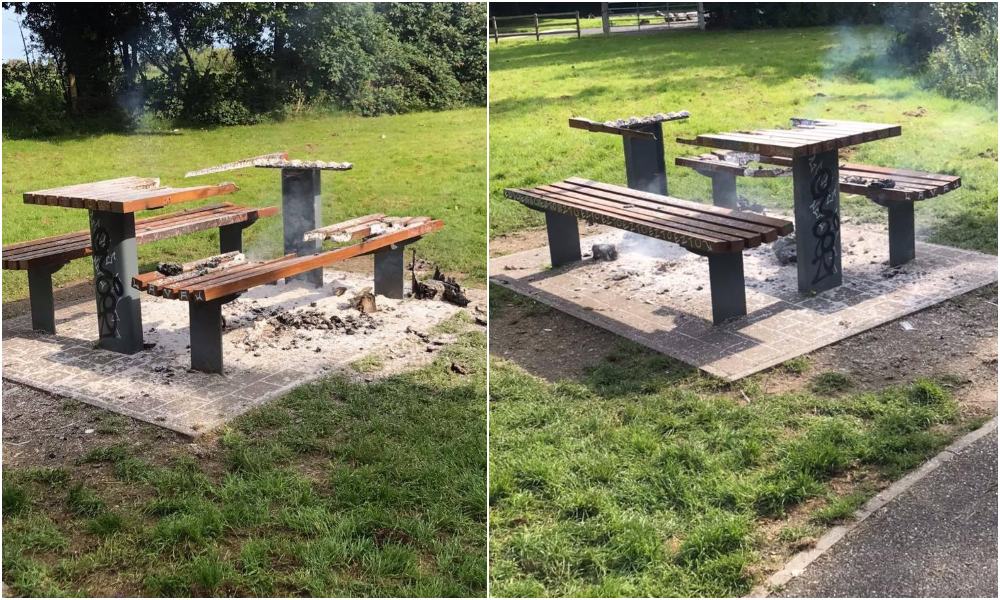 A picnic bench in a scenic Portadown park was set alight and completely destroyed by mindless vandals late on Saturday night.

The remnants of the bench in Hoys Meadow – often enjoyed by families – was discovered on Sunday morning.

The Edenderry Community Development Association said they are “totally disgusted at the total disregard for this beauty spot”.

“Those who carried out this destruction have no respect for the environment or the community of Edenderry,” the spokesperson added.

“The wanton destruction of picnic benches designed to serve the whole community is just another example of the anti social behaviour that plagues Portadown at times,” said Ulster Unionist MLA Doug Beattie.

“Hoys Meadow has long been a place where young people gather and in the most part their behaviour is good.

“However this is the worst side of some who frequent the area and it tars everyone with the same brush.

“Anyone who was present and knows who perpetrated this senseless crime should inform the police via the 101 number.

“We all have a part to play in ridding our society of those intent on destruction and anti social behaviour. It’s time our community stood together to say this is not acceptable.”

Upper bann MP Carla Lockhart added: “Absolutely despicable! What kind of a society are we turning into? I will report also and ensure this is repaired and restored to its former glory. I will also speak with the Police on this matter.”

DUP Councillor Darryn Causby said he has Council to have cleared as soon as possible.

“Over the years ECDA and I have worked to secure investment in this area and every time it is wrecked, he added. “Can people not leave things alone for the community to enjoy.”

Ulster Unionist Councillor Julie Flaherty commented: “Unfortunately at this point I’m not shocked anymore at this. Dear only knows why they just don’t care – just awful!

“And this costs every one of us. You, and me, the ratepayers will pay for this to be removed and replaced.”

He was speaking after attending a meeting between local representatives, PSNI and Council officials on the issue.

Councillor Tennyson said: “The issues around anti-social behaviour in Dromore Park have been persistent and long-lasting. At times groups of up to 40 young people have been reported drinking and creating a nuisance for local residents. “A multi-agency approach is clearly required to address the issue and I’m pleased that representatives of relevant organisations came together to meet on Friday (7th August).

“We identified a number of key areas where cooperation is possible and initial steps that can be taken to help curb the issue: including additional patrols at problem times and engagement with young people in partnership with local community and voluntary organisations.

“This was the first of what I hope will be regular engagements with stakeholders until we see a satisfactory resolution. In the meantime, I would appeal to the young people concerned to reflect on the impact their actions are having on their local community.”