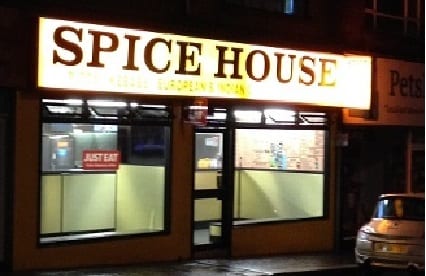 A Pakistan national is to be deported after he was found working illegally ijn a county Armagh takeaway.

The fast-food outlet on Thomas Street in Portadown will also face a hefty fine after Immigration Enforcement officers found the illegal worker.

Acting on intelligence, officers visited Spice House on Thomas Street Portadown on Saturday, October 15 and questioned staff to establish whether they had the right to live and work in the UK.

A 26-year-old Pakistan national who had overstayed his visa to join his spouse was arrested.

He is currently in immigration detention pending removal from the UK.

Two Chinese nationals were found working illegally, one was a 39-year-old man who is a failed asylum seeker and the other was a 47-year-old woman who has an outstanding immigration application.

Both had no permission to work and were escorted from the premises.

They must now report to Immigration Enforcement regularly whilst their cases are progressed.

Spice House and Cam Hing were each served a notice warning that a financial penalty of up to £20,000 per illegal worker will be imposed unless the employer can demonstrate that appropriate right-to-work document checks were carried out, such as seeing a passport or Home Office document confirming permission to work.

Mike Golden, from Immigration Enforcement in Northern Ireland, said: “We are working hard to tackle illegal working and those who abuse the UK’s immigration system.

“Illegal working is not a victimless crime. It cheats the taxpayer, meaning less money is available for vital public services, undercuts honest employers and denies legitimate job seekers employment opportunities. It also exploits some of society’s most vulnerable people.

“We expect everyone here illegally to leave the UK voluntarily. For those who don’t the message is clear – we will find, detain and remove you.”

People with information about suspected immigration abuse can contact https://www.gov.uk/report-immigration-crime or call Crimestoppers on 0800 555 111.