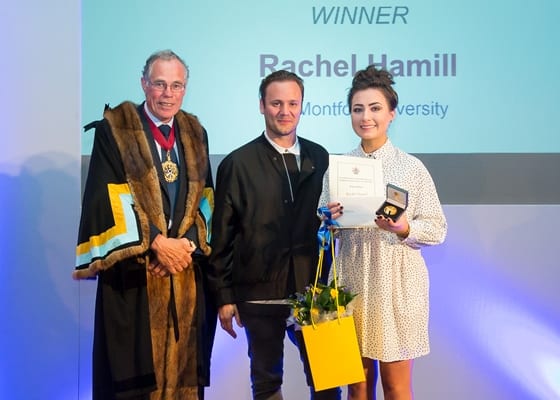 Rachel Hamill, 23, from Portadown is a Footwear Design student at De Montford University in Leicester and she walked off with the top prize at the awards, run by the The Worshipful Company of Cordwainers.

“Honestly, I was so overwhelmed when they announced my name. I was shaking.

“This is not just recognition for me, but for DMU. This is the first time we have won. I’m over the moon, not just for me and my tutors but for everyone on the course.

Rachel wowed the panel of judges with designs with a doll’s house theme.

“My designs are always fun and colourful – and I think that’s what won it for me.

“My portfolio was inspired by the Victorian architecture in Birmingham and London. There are a lot of buildings that look like dolls’ houses and that became my theme.

“I actually started off as an architecture student in Belfast but decided it wasn’t for me. I took an arts foundation course instead, and my tutor told me there was a really good course in footwear at DMU.

“I hadn’t even thought of footwear design at the time, but I love it. When I was younger and people used to say to me ‘what do you want to do?’ I used to tell them I wanted to be a designer, but I didn’t know what kind of designer. Now I know.”

Steve Weston, Head of Footwear Design at DMU, said: “The Worshipful Company of Cordwainers are incredibly supportive towards our Footwear Design students at DMU and their encouragement of young footwear talent across the whole of the country.

“Their contribution such as this prestigious design award really makes a difference to students kick-starting their careers in the dynamic global footwear industry.

“We were all extremely proud of the creativity, diversity of design influence and professional execution of the presentation portfolios delivered from all of our DMU Footwear design students for inclusion to the awards.”

Rachel paid tribute to her tutors at DMU, saying they encourage students to express themselves.

“The course allows us to be as creative as we want,” she said. “I have learned so much from Steve Weston and my other tutors.”

She will use a large chunk of her £5,000 prize to launch her own footwear label, called Rachel Rose, and plans to splurge the rest on a treat for her parents. “I would love to treat my parents to a break away as they have been so supportive throughout it all,” she said.

The Worshipful Company of Cordwainers is one of the oldest livery companies in London, with roots dating back to 1272.

The annual awards were launched in 2014 to celebrate young footwear design talent. They are contested by the ‘footwear universities’ of the UK – DMU, Northampton and Cordwainers at the University of the Arts, London.