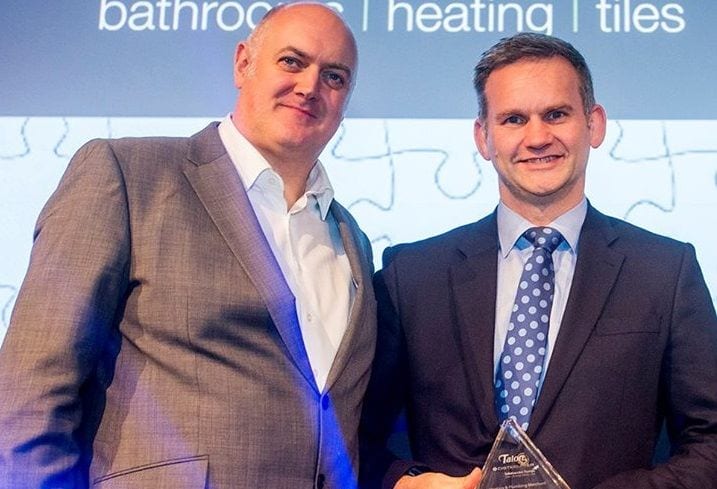 Portadown-based plumbing and heating supplier Bassetts fought off stiff competition from national companies to win the coveted title of the UK’s Heating and Plumbing Merchant of the Year at a recent awards ceremony in London.

The local company, which has 15 branches in Northern Ireland, was crowned the winner at the Builders’ Merchant Awards in the highly competitive category against businesses such as City Plumbing Supplies which has over 300 stores across the UK.

Now in its fifteenth year, the Builders’ Merchant Awards celebrate the success of the best exponents of great business practice in the building merchant industry across the UK.

Comedian Dara O’Briain presented Managing Director of Bassetts, Alan Wright, with the award at the ceremony in the Hilton Hotel in London on Friday 25th November.

Winning this national award tops off a successful year for Bassetts which has seen it invest heavily in its existing branches and expand through the acquisition of a local plumbing supplies business.

The acquisition of Clady Plumbing is part of the company’s continued expansion strategy driven by sustained growth across a range of product areas.

Bassetts invested over £500,000 in its Northern Ireland branches over the past 12-18 months which includes an upgrade to its Portadown showroom. A new ‘showroom only’ branch recently opened in Boucher Crescent and work has also been completed on the company’s Derry/Londonderry, Coleraine, Omagh and Dungannon branches.

The Builder’s Merchant Awards judges described Bassetts as a great business that, “offers the full package and which has transformed themselves over the past few years despite operating in a very difficult market.”

Managing Director Alan Wright commented: “We are extremely proud to have been recognised at a national level. Our company has gone from strength to strength over the past few years and recently we were named Northern Ireland Plumbers’ Merchant of the Year for the third consecutive year.

“I would like to thank each and every member of our team as our recent success would not be possible without their hard work.”

This is not the first time Bassetts has tasted success at the Builders’ Merchant Awards having won UK’s Heating and Plumbing Merchant of the Year in 2012 and being named a finalist in the same category in 2014.

Catering for every need, ranging from boilers and radiators through to bathrooms, showers, tiles and everything in between, Bassetts currently employs over 100 people with branches in Bangor, Belfast, Clady, Coleraine, Downpatrick, Dungannon, Lisburn, Greencastle, L’Derry, Mallusk, Newry, Portadown and Omagh.