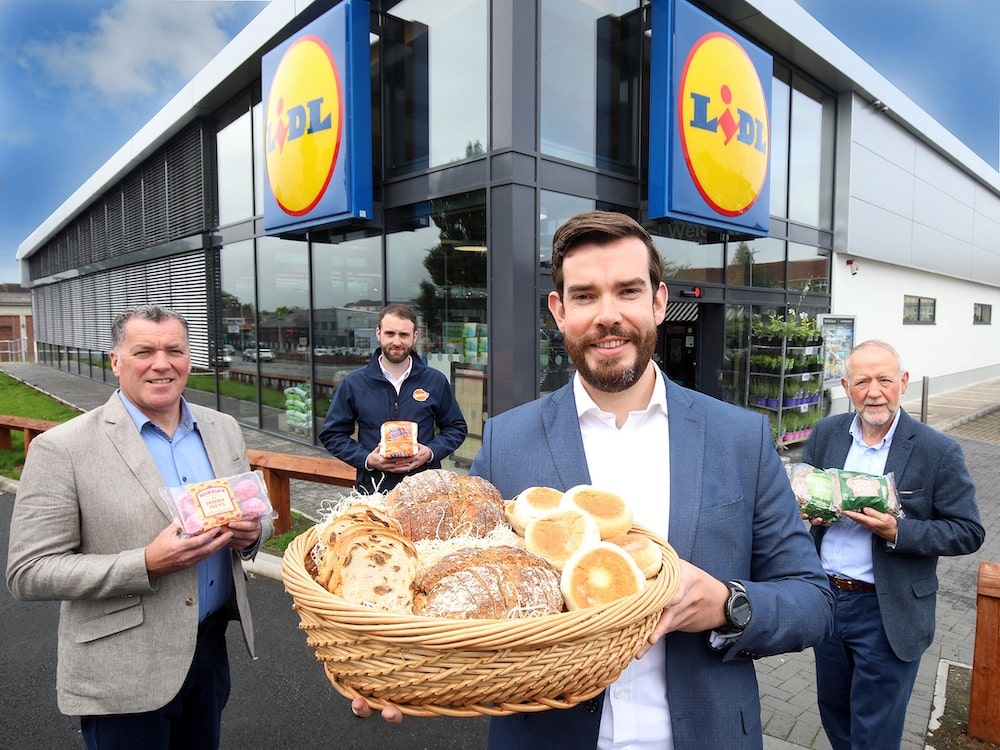 Irwin’s Bakery has proven a big success with Lidl Northern Ireland as the region’s fastest growing supermarket today confirmed a new and expanded contract for the full year ahead after a successful 20-year partnership deal worth more than £50 million.

Established in 1912 and employing more than 450 staff, the bakery has been a long-term supplier to Lidl Northern Ireland since it opened its first store in Cookstown in 1999.

Under the new supply deal, worth £2.7 million annually, the family-run bakery will continue to supply customer favourites including Nutty Krust batch bread, Irwin’s Veda malted loaf and Jammy Joeys buns to 202 Lidl stores across the island of Ireland.

With a focus on innovation, Irwin’s has also introduced an expanded new product range to Lidl Northern Ireland this year including traditional buttermilk soda bread and a low-calorie wholemeal sliced bread at only 59 calories per slice.

Ben Woods, Supply Chain Executive at Lidl Northern Ireland, said: “As a retailer committed to supporting local food producers, we are proud of our long-standing partnership with Irwin’s Bakery. A brand synonymous with Northern Ireland, Irwin’s was integral in supporting Lidl’s growth over two decades ago. Since then, we’ve worked strategically together to advance our business growth for the benefit of customers and staff.

Since 1999, our partnership with Irwin’s has delivered over £50 million of products through our store network across the island and we’re hungry for more. This renewed supply deal with Irwin’s will see a range of innovative new products introduced alongside family favourites and cements our commitment to investing in home-grown producers as we enter a new decade of growth in the retail sector.

Lidl’s increased focus on bakery has been enthusiastically embraced by customers locally and, with an extensive range of great-tasting, locally-produced products, we’re proud to provide our customers with the freshest, best-quality bread and baked goods for an authentic taste of Northern Ireland.”

Michael Murphy, Irwin’s Bakery Chief Executive Officer, said: “We thrilled to count Lidl Northern Ireland as one of our major customers and to have supported its own success over 20 years. During this time, Irwin’s has enjoyed double digit growth across a variety of bakery sectors and our supply deal with Lidl Northern Ireland continues to grow year-on-year. Not only has this supply contract supported our growth strategy, but it has also enabled us to increase production, create more jobs locally and expand our range of products.

The renewal of the supply deal with Lidl Northern Ireland marks a new decade of partnership and we look forward to seeing where this will take us next. It’s great to work with a company that has the same brand values and commitment to its local communities and we will continue to support each other in our efforts. With an eye on future growth, we are keen to expand our scope of supply through Lidl Northern Ireland and hope to bring our authentic tasting products to new markets.”

The supply deal is the latest move by the retailer in its ongoing support and commitment to local food suppliers.

An independent report into the economic impact of Lidl Northern Ireland’s operations revealed that the retailer spends at least £290 million annually with suppliers across the region while also supporting 3,500 jobs.

In 2018, Lidl Northern Ireland struck a deal with Northern Ireland’s Dale Farm, the UK’s largest farmer-owned dairy co-operative, to supply locally made cheddar cheese to 8,000 Lidl stores across 22 countries in the UK, Europe and the United States.