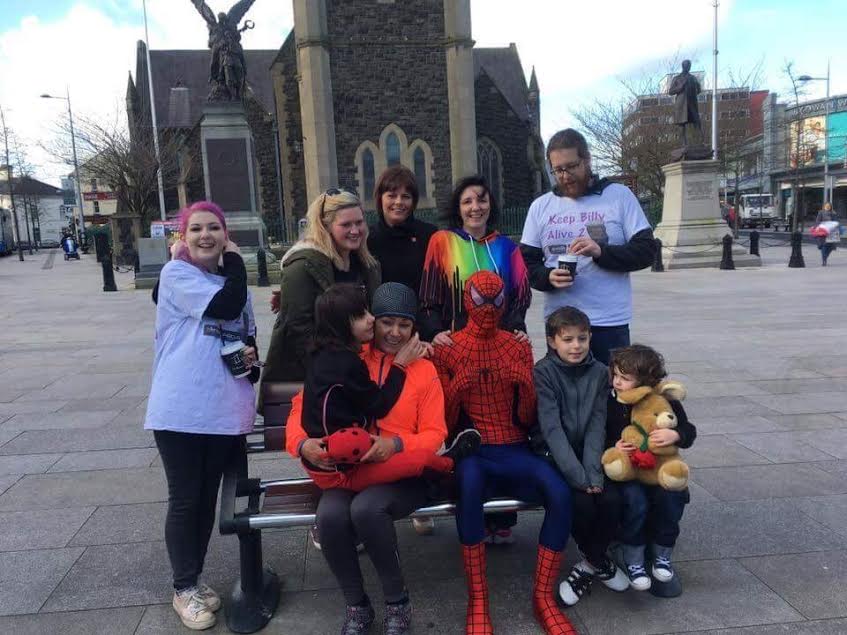 Charlotte Caldwell’s campaign to have the powers-that-be recognise the benefits of medicinal cannabis oil and make it legally available for her son Billy reached Portadown today.

The devoted mother has been walking 150 miles to an appointment at the Royal Victoria Hospital in Belfast.

Billy suffers from intractable epilepsy, seizures from which could kill him.

But Charlotte launched the Keep Billy Alive campaign and has amassed a huge support since leaving the family home at Castlederg, walking toward Belfast, from town to town.

Today, in Portadown, local Ulster Unionist Councillor Julie Flaherty – who lost her two-year-old son Jake in 2013 and has devoted herself to helping other parents – was delighted to meet Charlotte and Billy.

Their latest awareness and fundraising drive will culminate in an appointment, finally granted, at the Royal Victoria Hospital, to discuss treatment for Billy.

It has been a two-year campaign for treatment, namely medicinal cannabis oil which is used in America to treat the condition, intractable epilepsy, from which Billy suffers.

He has been seizure free since travelling with his mother to Los Angeles for the treatment late last year.

Charlotte is campaigning in order to allow Billy to receive this life-saving treatment here at home.

They have been walking from Castlederg, passing in recent days through Banbridge and Markethill, in order to make Belfast for Wednesday.

Today they arrived in Portadown.

Councillor Flaherty said: “I really wanted to meet Billy and his mum Charlotte, especially when I knew they would be in my home town.

“I know what it’s like to have to fight for a sick child, and I know her feeling of frustration at the system.

“As a mother, you feel so powerless when your child is so sick, and you just want to be able to do something to fix them.

“I found Billy to be an incredibly engaging and affectionate boy, and his mother Charlotte, as I imagined…very determined.

“There is nothing as powerful in this world as a determined mother, believe me.”