‘Bubbly Portadown-born Gloria Hunniford’ will be awarded Freedom of Borough 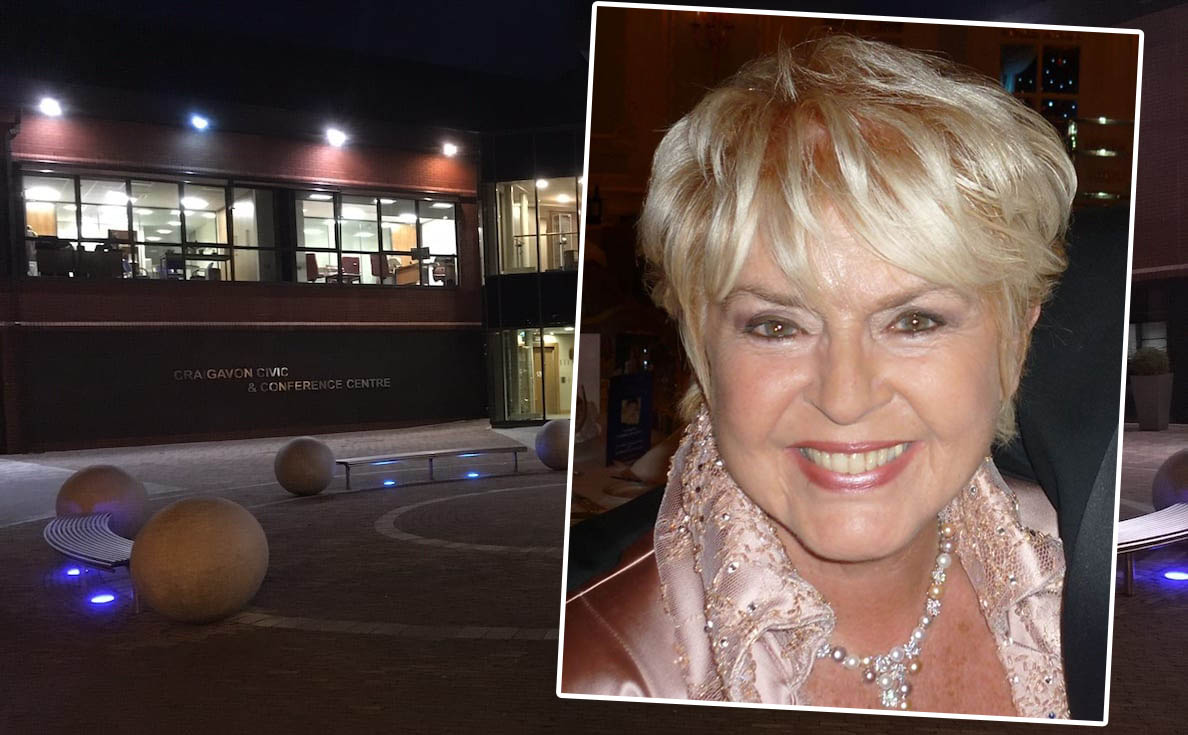 TV broadcaster and charity campaigner Gloria Hunniford will be awarded the Freedom of the Borough of Armagh City, Banbridge and Craigavon.

A notice of motion had been brought forward by DUP Councillor Margaret Tinsley, seconded by Alderman Sydney Anderson.

The motion was to recognise Gloria – who is a native of Portadown – as “an excellent ambassador and advocate for this borough”.

It asked – and was approved – that council “confers the Freedom of the Borough of Armagh City, Banbridge and Craigavon to Mrs Gloria Hunniford OBE in recognition of her outstanding television and radio broadcasting achievements and contributions to cancer charities and services”.

Councillor Tinsley, in bringing her motion, described her as “an inspirational lady” and said she had followed her career for many years.

She explained that she was born in a terraced house on the Armagh Road in Portadown and attended Churchill Primary School, before moving on to Portadown College, where she attended along with Dame Mary Peters, “another outstanding lady of achievement” who holds the Freedom of Lisburn and Castlereagh Borough.

Said Councillor Tinsley: “She grew up in what she described as a loving home. Her father worked in the local newspaper and was a part-time magician, and when she was a child she would go to the venues with her father, and she believed this sparked her love for entertainment.

“As a child she was a great singer and she sang in Portadown College. When she turned 17 she had the opportunity to go to Canada with a family member and this enhanced her singing career on radio. But there was no place like home and she returned to Northern Ireland where she saw a position for a production assistant within Ulster Television. She applied and was successful and offered the post.

“Her future husband was a cameraman on the show and she married him and had three beautiful children while she still continued to sing at night.

“She made a record which made it to number seven and was invited to discuss this on a radio programme. During the programme the producer interviewed her and offered her a job with the BBC as a radio broadcaster.

“This was a remarkable achievement within a male-dominated environment.

“Television expanded and Gloria continued to do radio during the day and television when the opportunities arose, reporting on many horrendous events of the Troubles.”

She told how UTV were expanding their news programme and the head of programmes contacted Gloria and she was appointed to Good Evening Ulster where she interviewed many famous celebrities.

Said Councillor Tinsley: “Gloria once said that her life now was all based on what she learnt in Northern Ireland. It taught her well and gave her a great grounding for her future career on the mainland.

“On an occasion when she was in in England she called into BBC Radio 2, as you do, for a wee cuppa and a chat with the radio controller, and approximately a year later she was presenting the 12noon to 2pm slot. What a remarkable achievement!

“So she left for London with her family with utter determination. Her radio show was highly successful and during this time she was then asked to do a chat show called Sunday, Sunday, interviewing many Hollywood actors including James Stewart, Audrey Hepburn and one of my all-time favourite actresses, Doris Day.

“Even though Gloria had a tremendous TV success, being a mum to her two sons Michael and Paul and daughter Caron was always her priority, and they went on to have very successful careers.

“I actually remember when I was in my early teens being very friendly with one of Gloria’s nieces. Her niece wasn’t boasting or bragging but she was telling me what it was like to be on the Blue Peter set where Caron was presenting, and I can’t begin to tell you how envious I was at that time. That was a big deal for me.

“That was part of Caron’s career starting off. Like most mothers the closeless and love for your daughter is indescribable. Gloria and Caron were no exception. Caron was absolutely beautiful.”

She recalled buying Hello magazine which covered her career, wedding and birth of her two sons, and added: “Following the birth of Caron’s second son she found a lump in her breast and was given the diagnosis of breast cancer, and tragically passed away at the young age of 41.

“It was so sad and I didn’t realise but many years later I too lost three friends between the ages of 39 and 41 to that same illness.

“Gloria was heartbroken and as a mother you wonder how you ever come through this. But although heartbroken Gloria wanted to do something positive in memory of Caron and help others and she set up a charity, the Caron Keating Foundation.

“The Foundation has made a considerable difference to many individuals and families affected and dealing with cancer.

“Back in 2008 the Northern Ireland charity for Children with Cancer was the first in the United Kingdom to receive a grant from the Caron Keating Foundation. The charity was awarded £20,000 for the building of a new log cabin at Shimna Valley in Newcastle. This cabin was to be used by up to 16 teenagers as a place to stay during their illness.

“This facility was to complement the holiday homes that were already there that accommodate children with cancer and their families.”

She added: “The charity said at the time they were honoured that Gloria had chosen their charity from home to be the first recipient of the Caron Keating Foundation.

“The Action Cancer Big Bus delivers free life-saving breast screening and health checks across Northern Ireland and I know personally of individuals whose lives have been saved because they went for a check up on the bus but would not have gone to the doctor.

“Back in 2017, Gloria was listed on the Queen’s Birthday Honours List and was awarded the OBE for services to cancer and cancer charities.”

The councillor quoted the words of an article by former Portadown journalist, the late Victor Gordon, who said of her OBE: “It’s only right that bubbly Portadown-born Gloria should be moved up the scale to receive her first award.”

Councillor Tinsley said Gloria – now aged 81 –  was still blessed to enjoy ongoing good health and has no plans to retire, as she remains a regular on television, including as a panellist on Loose Women and on Rip-Off Britain.

Alderman Anderson, in seconding the motion, described Gloria Hunniford as a “truly remarkable” person, who had become a “household name”, praising her “ability, talent and dedication”.

He also praised Gloria for establishing the Caron Keating Founation and her work with cancer charities.

“As a Portadown lady we are justly proudly of her and would claim her as our own,” added Alderman Anderson.

Ulster Unionist Alderman Jim Speers also recalled being interviewed by Gloria Hunniford “quite a number of years ago” and called to mind when she would have been singing at guest teas in the locality, along with her father.

“It is quite fitting that this motion is brought here tonight,” he said, describing Gloria Hunniford as someone who has “always identified” with the borough.

“It is always good to know someone who has travelled far and always remember where they come from,” said Alderman Speers.

DUP Alderman Gareth Wilson said the award of the Freedom of the Borough was not given out regularly and it was a “great proposal”.

He said: “It’s not something we do lightly and it should be for those people we feel are true ambassadors for the borough and she is certainly one of those people.

“I had the great experience just over three yers ago of interviewing Gloria when I was Lord Mayor. I went to meet her at the Palace.”

He said he had asked Gloria for an interview as part of the Georgian Day production at the time and told how Gloria responded: “Absolutely.”

He described her as “very accommodating, very chatty and just a great personality”.

“In addition to her many radio achievements, I want to highlight again her commitment to charity work and in particular the Caron Keating Foundation,” he said, and told how it had contributed to smaller charities.

He too praised her efforts in helping others throught such charitable endeavours.

The motion was passed unanimously and Councillor Tinsley welcomed the backing of all councillors.

Councillor Tinsley said she looked forward to a fitting ceremony being organised to confer this great honour on Gloria Hunniford OBE.