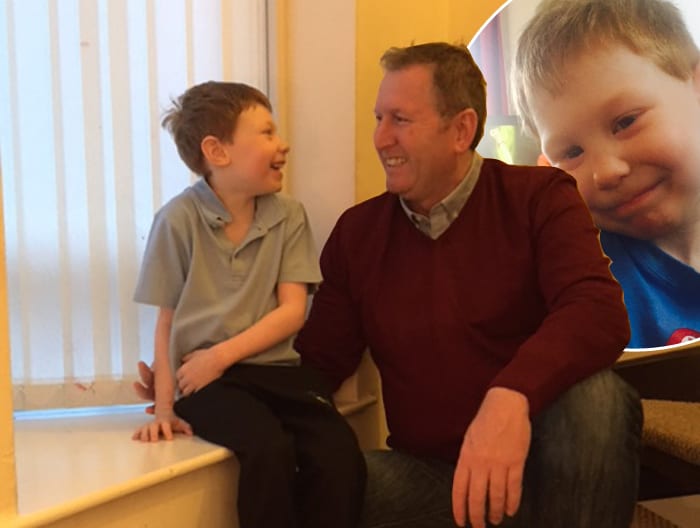 Bradley is five years old and lives with his mum, dad and two brothers in Lurgan.

He is a mischievous boy, unruly at times and finds it hard to concentrate or indeed pay attention.

He is loving in his own way but also standoffish. He likes a hug but doesn’t like to cuddle. He self-harms, biting and punching himself as well as banging his head off the floor or walls when he gets frustrated. It is disturbing to watch and difficult to deal with. He craves attention and doesn’t understand personal space. Shoes are a great annoyance to him as are buttoned up coats or holding hands. His speech is gentle, well formulated and polite, but also repetitive – using short words and short sentences.

To the unknowing eye Bradley is just a spoilt child that could use a bit of discipline and tough love.

Yet Bradley suffers from microcephaly the neurological disorder that has been linked to the Zika virus in Brazil. It has no cure, a confused diagnosis and can be a life limiting disorder.

For his mother, who suffers from epilepsy, it has been a struggle.

Firstly, to cope with a disorder that was misdiagnosed leading to misunderstanding, even to accusations that his self-harm was in fact abuse.

Secondly, fighting to find suitable accommodation and a place in school for her boys. And it was a fight, because Bradley’s mother was the wife of an RAF chef who was deployed to the Falklands when she first moved home to Northern Ireland to live.

There are many questions to ask here, should her circumstances have been taken into account in respect of schools and housing. Up until Bradley’s family moved to Northern Ireland they were under the care of the RAF and the NHS in England. Neither gave Bradley or his family the support they needed when they were at their most vulnerable, neither did the devolved government of Northern Ireland when they came home to live; and this is their home.

The Fresh Start agreement set aside tens of millions to support the most vulnerable in our society by ensuring they don’t lose out financially.

But some of our most vulnerable are in desperate need of basic services that can address their individual circumstances. Among these vulnerable are veterans and families of veterans returning home to Northern Ireland to live after serving their country.

Where in the much applauded Fresh Start Agreement is their needs addressed?

Since arriving home Bradley has been given support and diagnosed with microcephaly and more recently Williams Syndrome.

He has found a place in an appropriate school in Lurgan, a fantastic school which is both supportive of the family and with superb understanding of Bradley’s needs.

I love my grandson dearly and I’m am extremely proud of my daughter who has had to deal with the snarling glances and murmured remarks with dignity.

I just wish the trauma he and his family have gone through to get them where they are now could have been avoided.

Yet their future is bright and Bradley lives a full life as a mischievous young boy devoted to Spider-Man, Superman and his ‘superhero’ grandad.

A letter by Doug Beattie MC, an Ulster Unionist councillor for Portadown and Assembly candidate for Upper Bann.