Simon Dougan MBE, who owns the Yellow Door, has previously catered for world leaders and one of the pods would have 'an additional courtesy room for carers or, indeed, for security personnel when dignitaries visit' 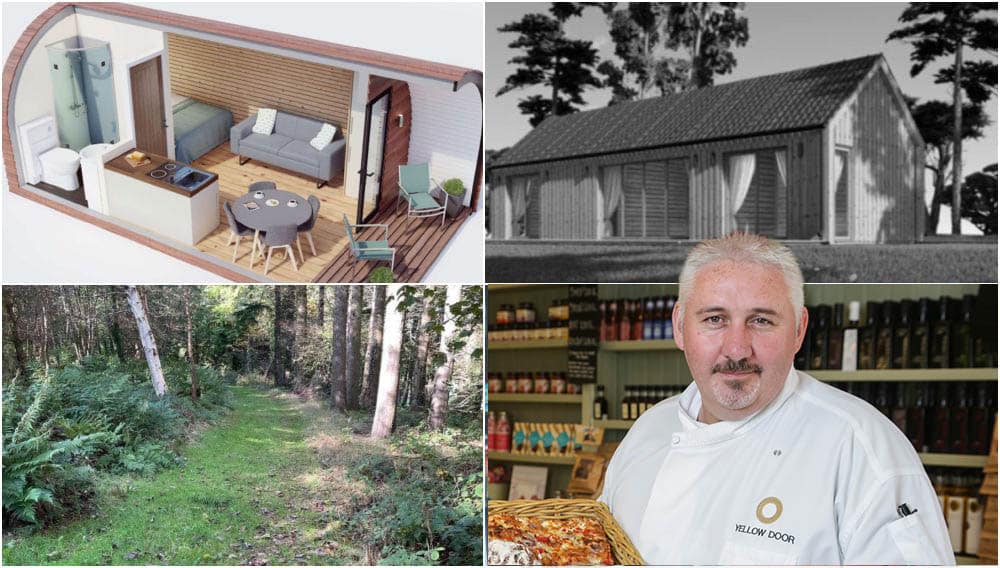 An award-winning chef is hoping to create a unique glamping experience in Portadown – aimed at attracting ‘foodie’ tourists from around the world.

Simon Dougan, who owns the Yellow Door in Portadown, has set his sights on this latest enterprise in his native County Armagh.

The former Killylea man, who travelled to Buckingam Palace in 2017 to receive an MBE for services to hospitality and catering, is seeking permission to create three new glamping pods.

Proposals, in the name of Yellow Door Kitchen Garden, have now gone before Armagh City, Banbridge and Craigavon Borough Council for consideration.

The pods would be located on “lands immediately west and immediately south of 169b Plantation Road, extending to and including the laneway between 54 and 54a The Slopes, Portadown”.

The works also include the development of a pond and associated site works.

According to a supporting statement, Mr Dougan’s plans would support his existing food business through expansion to create a “food-tourism revenue stream”.

Described in the supporting statement as a “champion of Northern Ireland’s rich food heritage and an ambassador for local artisan producers”, Mr Dougan is confident the development will prove a success.

The statement continues: “The Yellow Door Kitchen Garden business presently offers both ‘a day at Simon’s’ or ‘at home at Simon’s’, in which patrons attend world renowned Chef Simon Dougan MBE’s own home for a foraging and culinary delight.

“Simon and his team of chefs, bakers and chocolatiers cook everything they serve from scratch, which means,smoking local fish and meat, churning ice creams and sorbets and baking the renowned Yellow Door bread andpatisserie from the best local ingredients.

“The company has its own pastures, orchard, herb garden, vegetable and soft fruit plots as well as keeping bee hives to produce Yellow Door honey.

“The Yellow Door caters for hundreds of very special events all over Ireland and overseas, including last year’sWaterloo Ball for VIP Dinners. The Yellow Door also catered for The VIP G8 event in Fermanagh and the showcase of Northern Ireland Food in Brussels European Parliament for 700 Diplomats and special guests.

“The Yellow Door wholesale their famous award-winning bread and patisserie products to top quality restaurants, hotels and catering companies throughout the whole of Ireland.”

The planned glamping site is just shy of 300 metres from Bloomvale Thatched House – Ballydougan Pottery – which is described as a “significant visitor attraction in its own right and within walking distance of Ballydougan house shooting club”.

It lies adjacent to the existing orchards/apiary, herb garden, vegetable, and soft fruits plots in a grazing field which is “part marshy and waterlogged”; in the wider grazing field itself the company has scheduled lands for an afforestation scheme.

The pods would be made of solid timber and “blend unobtrusively with their immediate and wider surroundings“.

The three would be known as the Borage Retreat, the Ransoms Keep and the Foragers Lodge.

The statement adds: “The new buildings, which are essentially hand-crafted wooden glamping pods, which are proposed are sited on land which is part of an extensive tree planting project which will completely transform the subject site and its surrounding environs into a native woodland.

“Furthermore, the gently sloping topography of the site ensures that the new structures will sit comfortably in thelandscape.

“In addition, the site has long established boundaries of native species. Ancillary works to the proposal willinclude a treatment plant, which will be located underground.

“Additionally, the pods themselves are small scale in nature and number three in total; admittedly, the Foragers Lodge is larger, but this necessitated for an accessible pod, with an additional courtesy room for carers or, indeed, for security personnel when dignitaries visit.” Site map of the proposed plans

Each pod would include a sitting/living space; kitchen/kitchenette space; WC shower room; bedroom; and heating, lighting and electricity points.

The Borage Retreat and Ransoms Keep will both take the traditional glamping form and surround the centrally located Foragers Lodge. Access to all pods will be from the meandering permeable green gravel paths.

A total of four parking spaces, together with cycle parking facilities ffor each pod, would be provided.

The statement concludes that the proposal aims to create a “highly sustainable small tourism enterprise that can complement the existing business and respect the local landscape”.

The new development would see no more than eight guests at any one time.

And the statement has confirmed: “The site will have strict management policies in place for guests.

“Marketing will be directed towards foodies and couples, avoiding hen and stag parties etc. BBQs will not be necessary; an indoor BBQ facility is already present in the hosting area of the main house. Firepits will not be necessary and guests must respect quiet times as the site will be a retreat for guests”