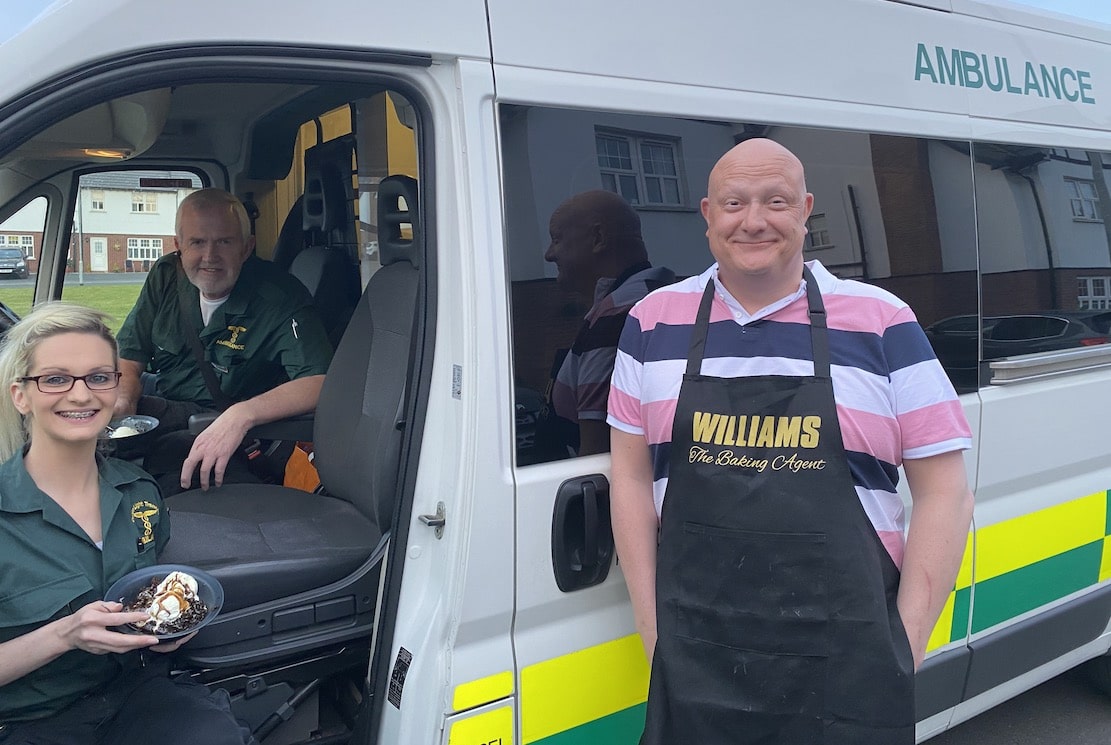 A Portadown businessman was paid an unexpected visit after his online baking session caught the attention of a nearby ambulance crew.

Many may have been shocked to see the appearance of ambulance on one Portadown street on Wednesday evening, but they need not to have worried.

The front-line ambulance staff had only one thing on their mind upon their arrival – dessert.

Owen Matchett has temporarily closed the doors to Williams Estate Agents, but the boisterous businessman has been sharing his exploits in the kitchen to viewers online.

Speaking to Armagh I, the one-time Come Dine With Me TV contestant explained how he came to have these very special guests sniffing about outside his home.

To deal with isolation the well-known Portadown man has turned to baking and sharing videos of his masterpieces on Facebook, under the pseudonym ‘baking agent’.

“It has turned out well, I am pleased to say; it has got a right number of views and the banter on it has been great,” said Owen.

“People have been on saying ‘oh do you do delivery?’ and ‘when can I call round’, so it has turned out well.

“People have been posting pictures of what they have baked today, but I have just taken it a step further, adding in my mental personality and people are finding it funny,” he laughed.

Only last night, Owen attempted what would be many people’s first choice on a dessert menu – Sticky Toffee pudding.

Said Owen: “So I always do a sort of before and after, one when I am in the middle or staring to make the dish and one then when it is finished.

“I had a woman messaging in saying ‘oh that’s lovely’, and then the same girl contacted me a couple of hours later, when I was literally about to finish the dish.

“She asked if there was any left? I said I was just about to pour the hot sauce over it and she asked; is there any chance of us getting a taste we are just about to start our night shift with the ambulance service.”

Owen joked: “I wasn’t exactly going to say no; I think they knew what they were doing.”

However, Owen was not prepared for the next thing in store as within 40 minutes Rachael and her fellow crew member, Morris pulled up in their ambulance.

“I gave both of them a massive chunk, they could not believe it and asked me several times if I had actually made it, so they were well pleased.

“So off they went and one of their first calls was a Covid-19 one; I was just well chuffed that I was able to give them a wee bit of smile before they headed off.”