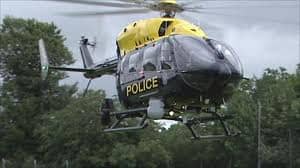 Police have praised a teenage girl for her actions after she maintained contact by mobile phone when she and a young friend became lost during the bad weather at the weekend.
The PSNI revealed details of the incident today (Thursday), outlining how officers came to the rescue of the girls, one aged 15, the other just 10.
On Sunday, police received a call from a 15-year-old girl who had become disorientated and lost her bearings after going for a walk with another 10-year-old girl.
The children had gone walking in fields in the Darkley area during the afternoon but became lost after the weather deteriorated badly and darkness fell.
Police maintained contact with the teenager on her phone and were able to establish their general location.
Officers conducted a foot search and located the two girls in a swampy area. Both were shaken but described as “safe and well”.
Inspector Kieran Quinn, Armagh Neighbourhood and Response, said: “This was a frightening experience for the two young girls and they did  exactly the right thing in contacting police when they realised they were  lost.
“Officers understood how scared the girls were and attended the area straight away.We had also tasked the police helicopter but, fortunately, we were able to locate the girls quickly.
“We’re delighted that we found the girls safe and well, through the mature actions of the teenager in contacting us and through the swift actions of our own  officers.”