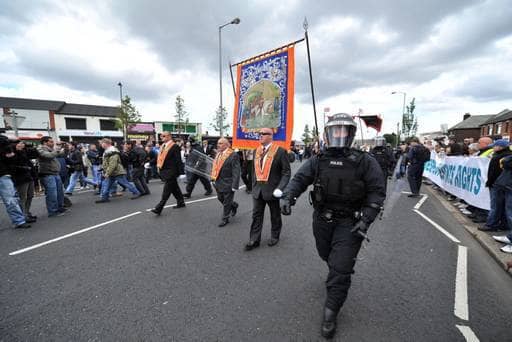 A decision to allow a loyalist march along part of the Garvaghy Road in Portadown on Saturday night has been overturned by the Parades Commission.

The Parades Commission had permitted bands to march along the lower part of the mainly nationalist area.

But representation from nationalist residents after a meeting yesterday (Tuesday) led to a reconsideration by the Parades Commission, on the presentation of what was viewed as “fresh evidence”.

The application to march along the route had been lodged by the Parkmount Arch Committee, who were to have been accompanied by two bands – Portadown True Blues Hillhaven Flute.

Local Unionists had argued that the march along Victoria Street did not actually take in the Garvaghy Road, which Orangemen have been banned from walking for the past 16 years, a decision which led to the Drumcree dispute.

In reconsidering the evidence, the Commission says that, should the parade take place without conditions being imposed, there could be an “adverse effect on community relations and the potential for public disorder”.

The new ruling bans the parade from entering the Garvaghy Road and directs it must turn left from Shillingtons car park and on to Castle Street.

Sinn Féin Cllr Gemma McKenna has welcomed the decision to prohibit the march from entering the Garvaghy Road area.

Cllr McKenna said: “It’s welcome news that the Parades Commission have listened to the views of local residents and elected representatives and produced a fresh determination.

“This ruling prohibits this new parade entering into the Lower Garvaghy Road and Victoria Terrace areas.

“We maintain the view that there is no rationale for any loyal order parade in this area.

“I would call on everyone to do all that they can to reduce tension and to ensure we all have a peaceful summer.”