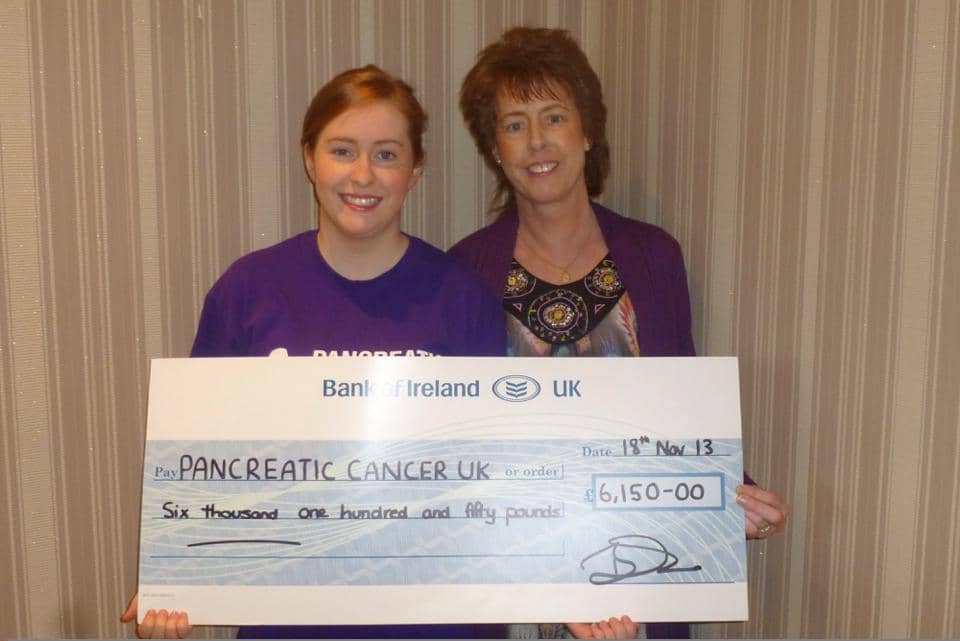 An e-petition to try and force a Government debate to raise funding and awareness for pancreatic cancer has now exceeded the 100,000 signatures required.

Today (Tuesday), April 8, was the closing date for the petition.

And, as a result of passing the 100,000 milestone, it will now be referred to the Backbench Business Committee and should feature at Parliament.

Armagh I first reported the story of Grainne O’Neill, an Armagh student who lost her mum to pancreatic cancer, on March 20.

At that time, the petition had 56,000 signatures. After successful media appeals, including through UTV, the petition stood at almost 106,000 when closing this morning.

Grainne O’Neill, a student at Belfast Metropolitan College, was devastated when mum Anne lost her battle with the illness and has devoted herself to fundraising and trying to raise awareness.

Grainne told Armagh I: “I’ve raised over £6,500 for Pancreatic Cancer UK and have now signed up to trek the Great Wall of China in October and I am raising another £3,500.

“I feel so strongly about the charity and the cancer because the statistics are shocking and I never want families to have to go through what we went through!”

Grainne has also been campaigning for months to help get signatures for the online petition for more funding to be given to pancreatic cancer.

It is lobbying to “provide more funding and awareness for pancreatic cancer to aid long overdue progress and earlier detection and, ultimately, improved survival rates”.

Grainne’s mum Anne O’Neill (pictured with Grainne) was only 54 years of age and got seven months from diagnosis before she tragically passed away, devastating family and friends.

Grainne said: “My mum wasn’t fully diagnosed until the end of August, but told the middle of July that it probably was pancreatic cancer, they just needed to carry out some more tests to be 100%. Because the pancreas is behind so many organs, it is harder to diagnose and, because there isn’t much research or things known about the cancer, it is even harder to diagnose.

“A prime example of this is my mum, as she had felt fine until the last weekend of May and she ended up having stage 4. My mum got only seven months from diagnosis. She left behind her husband, daughter (26), son (24) and me (21).”

She explained: “I started all my fundraising and campaigning really since October, apart from my twitter page- @beatpc in the summer. Since then I have become an Events Volunteer and a voice for Pancreatic Cancer UK and have taken part in the four mile run out at Navan Fort on Sunday, October 13, with my brother Fergal, sister Sinéad O’Neill, my sister’s boyfriend and my cousin.

“I had turned 21 on October 10, so asked for sponsorship instead of presents.

“I am in second year of my foundation degree in Events Management in Belfast Metropolitan College and, as part of my course, we organise an event every semester. Last year we organised a charity night called ‘Filthys Funhouse’ in the Gypsy lounge in Filthy McNastys, Dublin Road, Belfast. We raised £1045 from this event.

“On Saturday, November 9, we organised a coffee morning in the Cathedral Synod hall, we had an amazing turn out and raised £2700.”

Some £600 of this was donated to Charis Cancer Care, which provides complemetary cancer care in Cookstown, and which Grainne’s mum Anne had attended once a week.

The other £2100 was donated to Pancreatic Cancer UK.

Overall, more than £6,000 has been raised for Pancreatic Cancer UK.

Statistics reveal that the five year UK survival rate is less than 4% and, alarmingly, rates have not changed in over 40 years!

And more alarmingly is the fact that pancreatic cancer only receives 1% of cancer research spend per year, even though it’s the 5th biggest cause of cancer deaths.

Grainne is determined to continue to fundraise and raise awareness.

She said: “I feel so passionately about this disease and have signed up to trek the Great Wall of China in October for Pancreatic Cancer UK.

“My sister and I also discovered an e-petition about pancreatic cancer in the summer and from then I created a twitter page called @beatPC, where I tweet people to get them to sign the petition.”

The petition was actually started by Maggie Watts, who lost both her husband and mother-in-law to pancreatic cancer.

Grainne would like to thank all those who took the time to sign the petition and is delighted that, with the goal passed, it should now go before Parliament.

At the same time, you can still help Grainne and the O’Neill family reach their fundraising goals – to support the fundraising trek, visit http://www.justgiving.com/Grainne-O-Neill2

Armagh relegated after defeat to Donegal