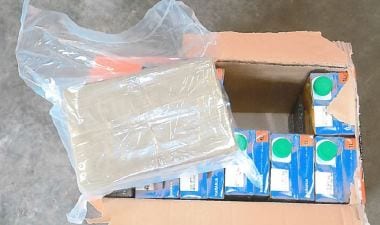 Members of an organised crime gang who smuggled cannabis into Northern Ireland in crates of orange juice have been jailed.

It follows an investigation by the National Crime Agency.

Officers observed Mark Fleetwood, 53, and Paul Green, 63, both from Birmingham, packing 167kg of cannabis resin into a white van at a retail park in Camlough in south Armagh in April 2015.

The drugs – which had a potential value to organised crime of £150,000 and a potential street value of £800,000 – had been hidden among orange juice cartons in pallets imported from Spain via Dublin.

Fleetwood and Green were sentenced to two years and four months – half in custody and half on licence – at Newry Crown Court.

The group’s ‘fixer’, Stephen Dainty, 54, also of Birmingham, received the same sentence for importing a Class B drug.

Over a period of two months, he rented a unit in the retail park, organised logistics around the consignment, and arranged for Fleetwood and Green to travel from Birmingham to Newry to take delivery of the drugs and facilitate their onward distribution.

Following their arrests – NCA officers on searching Dainty’s home, found documents relating to the orange juice delivery and were able to place the three together on flights between Birmingham and Dublin by analysing telephone and computer communications.

Rob Burgess, Branch Commander NCA Investigations, said: “We caught Mark Fleetwood and Paul Green with a substantial amount of cannabis resin which, if sold on, would have generated significant cash to potentially fund more criminality.

“We are grateful for the support of PSNI in disrupting the group’s activities and ensuring the drugs did not make it to the streets of Northern Ireland.

“The NCA will continue to work in partnership to protect Northern Ireland from criminals who try to exploit borders and bring them to justice.”

Picture: The drugs were discovered hidden among these orange juice cartons. Picture NCA.