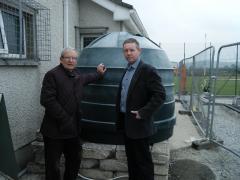 A South Armagh gaelic club has fallen victim to oil and diesel thieves.

And local political representatives have urged vigilance amongst the public to keep an eye on community buildings and sports clubs to prevent thefts such as this.

He said: “These callous thieves have stolen from the community and left the club with another bill that is ill afforded.

“The Gaelic Club is run by volunteers who give thousands of of their time freely every year to enhance facilities in the area. Fundraising is a constant theme of these Clubs in order to survive.

“I condemn this attack on the community and would ask those who carried it out to return the heating oil and the diesel which they removed from machines working on the new pitch.”

Sinn Féin Westminster candidate Mickey Brady has urged communities to be vigilant in response to this latest theft.

He said: “This criminal anti social element are content to destroy that which others have toiled to create. We must stand firm against these parasites to prevent them from continuing their nefarious
activities.

“I would ask residents to be aware of suspicious movements around community buildings and report it to the police.”