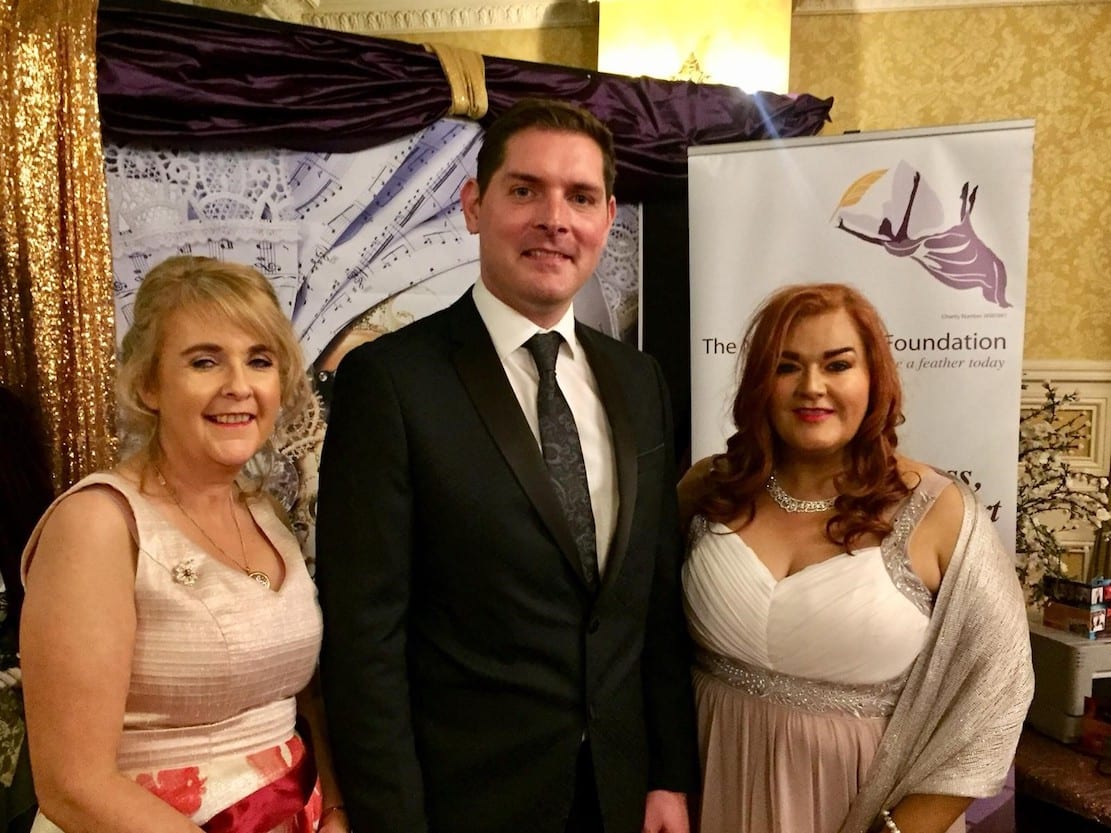 The Niamh Louise Foundation, one of Northern Ireland’s most established suicide prevention and bereavement charities, is delighted to announce that Malachi Cush is the organisation’s new patron.

The singer-songwriter, radio host and television presenter’s key role at the Foundation was confirmed at the charity’s Gala Ball in the Glenavon House Hotel on Saturday evening.

The Niamh Louise Foundation was formed following the death by suicide of Tyrone girl Niamh, at the age of just 15.

Niamh’s mum, Catherine McBennett, stepfather James, and Anne Donaghy, now Chief Executive of Mid and East Antrim Borough Council, co-founded the Foundation on the 2nd of February 2006 – what should have been Niamh’s 16th birthday.

The charity works with a range of voluntary and statutory agencies to reduce the numbers of people taking their own lives in Northern Ireland – the worst affected region in the UK for suicide rates.

The Foundation’s Gala Ball on Saturday night was packed by members from right across the local community, including survivors and their families, coming together to support the charity’s vital work.

And during the event, Malachi was confirmed as the Niamh Louise Foundation’s new patron.

Malachi said: “Having known and supported the work of the Niamh Louise Foundation for many years I am both honoured and humbled to have been invited to be patron of the charity.

“The work the Foundation undertakes within our community continues to be of the upmost importance. I know many people whom the Niamh Louise Foundation has supported and they have testified to how they have benefited from the expertise and care which is delivered with the utmost sensitivity and with love.

“I wish to thank the Foundation for their work which has undoubtedly saved lives and has helped some of the most vulnerable within our community, and I look forward to supporting them into the years ahead.”

Anne said: “We are delighted Malachi has accepted this role and we know he will be an incredible ambassador for this organisation in the weeks, months and years ahead.

“Malachi has been a true friend to the Foundation since its inception and we are so thankful to him for consistently giving us his time freely. Nothing has ever been too much trouble.”

Anne added: “Malachi and everybody sat here tonight, by attending this evening, sponsoring or donating prizes, and helping with the organisation, you are supporting us to achieve our mission and realise our goals.

“The Gala Ball is about raising money to help those in need, but it is also about reflecting on the journey this Foundation, led by Catherine, has been on since 2006.

“It is about hope and showing there is light at the end of the tunnel, no matter how dark your world may appear.”

It is a tailored care package, delivered by the Foundation, to support young people aged eight to 25 who are in emotional distress.

This includes young people with thoughts of suicide and/or self-harm, or who have been bereaved by suicide, and help them to heal and recover while developing life skills and building self-esteem and resilience.

For more information on the Niamh Louise Foundation, visit: www.niamhlouisefoundation.com