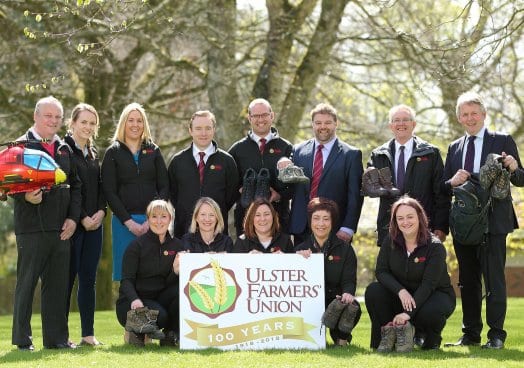 UFU President Ivor Ferguson and staff who will be taking part in the five peaks fundraiser.

Ulster Farmers Union staff will be scaling the dizzy heights when they stage a fantastic fundraiser for NI Air Ambulance.

With newly-elected Markethill man Ivor Ferguson at the helm, the UFU – which is celebrating its centenary this year – is hoping to raise £100,000 for NI Air Ambulance during the course of 2018.

And one of the big events aimed at helping members do just that will see participants climb five peaks – taking in each county in Northern Ireland in just one day.

“The aim of the day is to raise money for the NI Air Ambulance, a service which the UFU sees as vital for rural dwellers,” explained Mr Ferguson.

“Our members are spread out all over Northern Ireland. Should there be an accident, it could be on a side of a mountain where only a helicopter could reach.

“The Accident and Emergency team on board the Air Ambulance talk about the ‘golden hour,’ in a rescue. If called to an accident, the chances of saving a life or improving the outcome is vastly improved if the doctor and paramedic can get there in under 60 minutes.”

The walk will take in five peaks in each of the Northern Ireland counties – Slieve Gullion in County Armagh, Cuilcagh in Fermanagh, Sawel – between the borders of Tyrone and Londonderry/Derry, Slemish in County Antrim and Slieve Croob in County Down.

Participants will be on their feet from 7am with an estimated finish time of 10pm on Monday June 4.

Thirty would-be hill walkers have signed up for the test and already many are in training. Walkers will be supported by other volunteers providing transport and food.

The Air Ambulance needs around £2.5 million pounds a year to keep it operational. One call-out to an emergency costs on average £5,500 pounds.

The UFU’s goal is to raise £100,000 for the NI Air Ambulance this year and if you would like to make a donation go to centenary.ufuni.org and click on ‘Donate’.