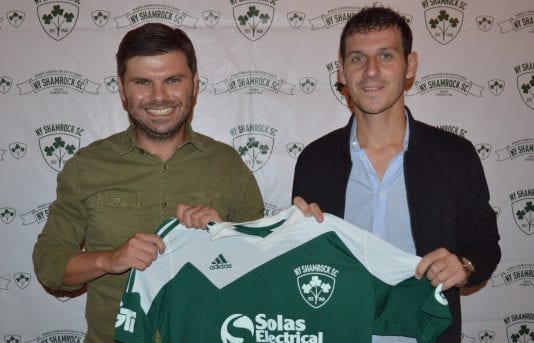 Former Armagh star Jamie Clarke has turned his attention from GAA to soccer and has signed for New York Shamrocks.

The 27-year-old had been training with professional club New York Red Bulls but will play for Shamrocks in Division One of the Cosmopolitan Soccer League.

Clarke has been in New York several months now ad says he’s delighted to get his chance to play competitively across the Atlantic.

“I have enjoyed moving to New York and I was keen to find a soccer club that plays at a competitive level,” he told the club’s website.

Clarke was introduced to former Manchester United youth and League of Ireland player Kevin Grogan (main picture), who is the technical director and first team coach of the Queens-based club.

“It’s been a good experience training under Kevin and he offers great advice and coaching experience,” added Clarke.

“We’re all focused on the first game now and ensuring we can start off with a win.”

The club begin their league campaign on Sunday away to Zum Schneider of Randalls Island.