Planners had been previously been recommending the Pearce's Gate project - which includes 73 housing units, three retail outlets and coffee shop - should be approved 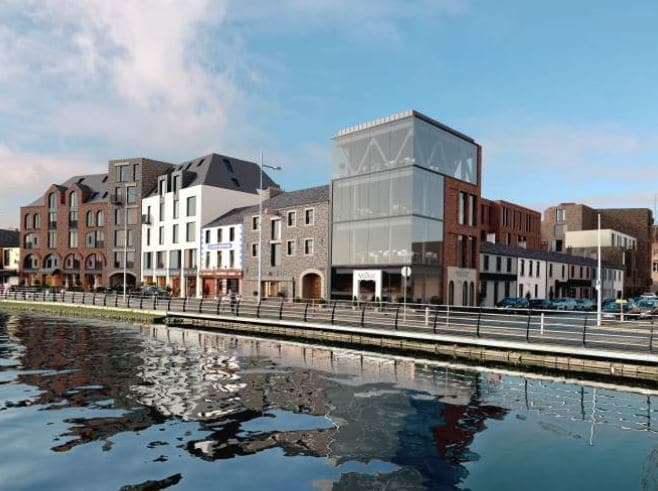 A major multi-million pound development of offices, apartments and retail outlets in Newry is to be recommended for refusal.

And it comes after planning officials had earlier expressed the opinion that the Pearce’s Gate project should be allowed to proceed with conditions attached.

The proposals relate to an expansive site in the Merchants Quay/Cornmarket area of Newry.

It has been described in papers before Newry, Mourne and Down District Council as being a “major city centre mixed-use development” scheme.

Applications, in the name of Kerr Property Holdings Ltd, had been submitted in the spring of 2020.

There had been some amendments to the proposals at the request of planning officials.

They had been recommended for approval but again a number of conditions were being put in place.

Now planners are saying that the huge project as stands should be rejected.

Three separate applications – which includes listed building consent and approval for demolition within a Conservation Area – have been under consideration, with planning officials’ recommendation to this week’s committee being being that of “refusal” for all three.

Hundreds of jobs would have been created during construction and upon completion.

The earmarked site extends to in excess of 10,000 sq metres.

The overall development consists of a total of five blocks ranging from between three and five storeys.

The project includes over 864 sq metres of office space, taking in the three-storey listed building at 47 Merhants Quay, the former Renault car sales showroom and garage. It was owned by the Goss family, from Mayobridge, but has been vacant for many years.

It was also intended that the development include three retail units – with a total collective floorspace of 518 sqw metres – each with service yard area. No tenants had been identified but planners, in assessing the required number of parking spaces, based their figures on the belief that the units would be “food retail”.

There would have been, if successful, a coffee bar incorporated too, with this to be located within the ground floor of the listed building.

The ambitious proposals would also involved a substantial programme of demolition of existing properties with replacement ‘new-builds’.

Buildings at Merchants Quay and Cornmarket would have been taken down and the site completely redeveloped and transformed.

There has been a major emphasis on housing as part of the scheme.

A total of 73 residential units – nine less than the original 82 planned – had been incorporated into the proposals. These would be within multi-storey blocks and the residential accommodation was to have consisted of a mix of both private and social housing. Wheelchair accessible apartments at ground floor level – as well as considerable landscaping – featured too.

The trio of refusal recommendations will come as a huge blow to the applicant, who has invested considerable time and money into this project.

The planners’ opinions will now go to councillors sitting on the planning committee when it meets next Wednesday, November 16.

More details will be presented on the reasons for recommending refusal and, if councillors back that course of action, the applicant would have the right to appeal against any decision of that nature.