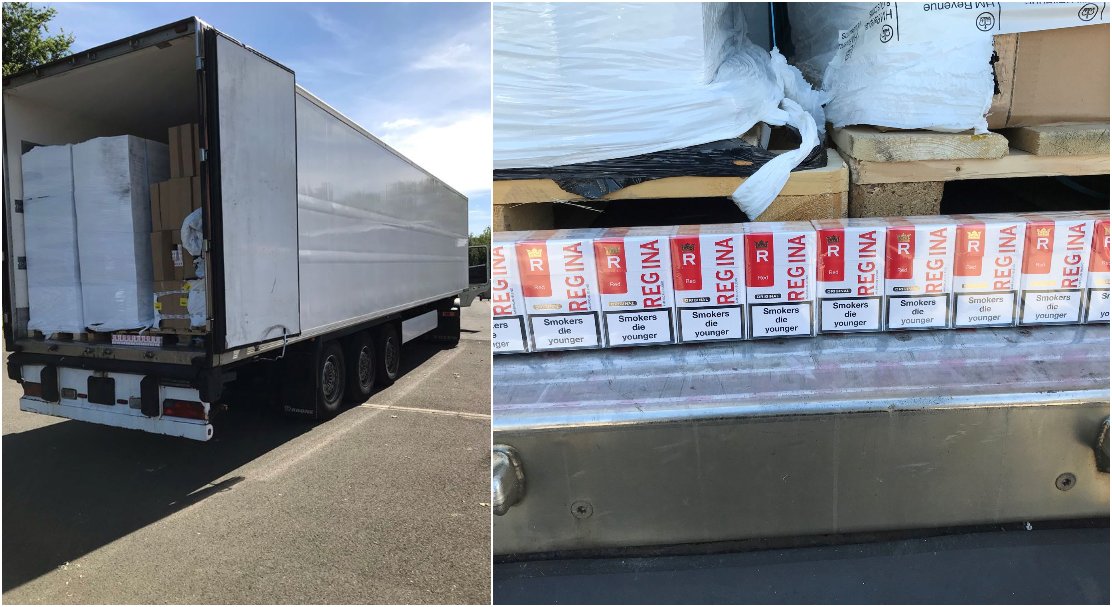 Officers from HM Revenue and Customs (HMRC) attended a property in south Armagh along with colleagues from the PSNI.

HMRC made the arrests at the scene and seized eight million cigarettes. The suspected illicit tobacco products are worth an estimated £3m in lost duty and taxes.

A heavy goods vehicle and its refrigerated unit (pictured), a van and a fork lift truck were also seized along with approximately £12,000 and €2,000.

The operation led to a further eight searches across the border carried out by the JATF’s Revenue Commissioners and An Garda Síochána, with almost €100,000, thousands of duty stamps and approximately two and a half tonnes of hand rolling tobacco being confiscated.

“HMRC and our partner agencies are continuing to work together and are prepared to deploy where necessary to disrupt and dismantle the illicit trade of tobacco and other forms of criminality,” said Steve Tracey, Assistant Director, Fraud Investigation Service, HMRC. “Multi-agency investigations mounted by the Joint Agency Task Force show what can be achieved by our ongoing cross-jurisdictional cooperation to tackle criminality.

“Our collaboration, even during a global pandemic, demonstrates that we are committed to working with each other, at every level and in every location to tackle organised crime on a cross border basis. As we did today, we will take all measures necessary to ensure we can continue to carry out this important work successfully.”

Detective Superintendent Rowan Moore, from Police Service NI’s Criminal Investigation Branch, added:
“We are committed to working alongside our partner agencies to combat the illicit trade of illegal tobacco and put those who seek to profit from criminality before the courts. “Those trading in illicit cigarettes may be funding terrorism and criminality which brings misery and harm to local communities and today’s action sends a powerful message to those engaged in this type of criminality.”

The three men arrested by HMRC and in police custody are aged 34, 37 and 55. Investigations are ongoing.