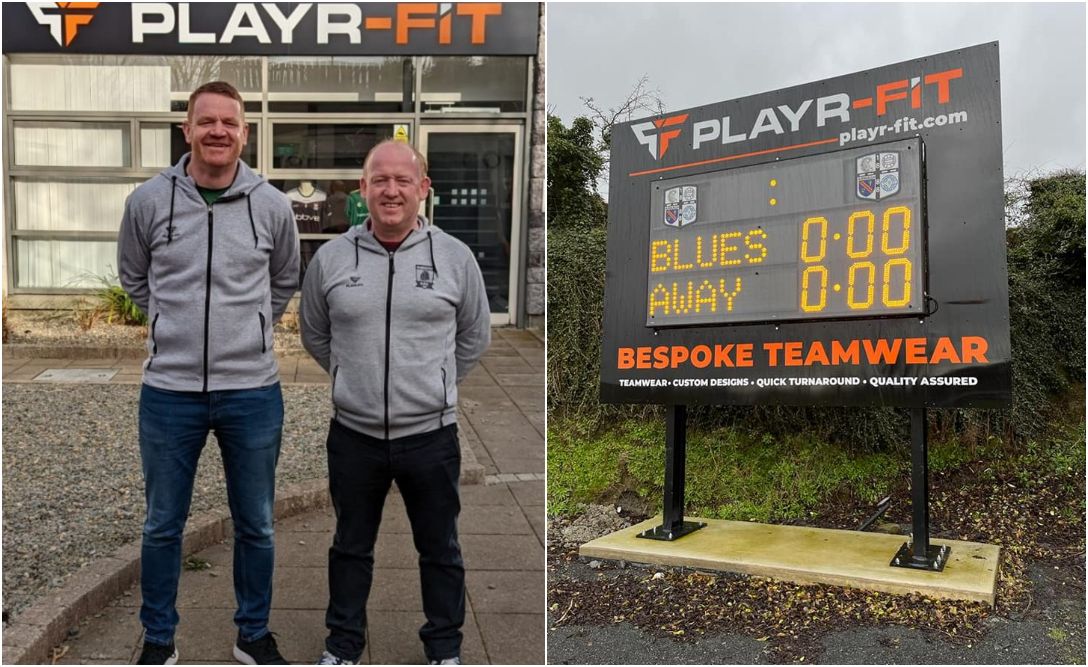 For two county Armagh men, starting a sportswear brand was something of a no-brainer.

Kieran Quinn and Steven Burns saw a gap in the market and they went for it.

Despite a strong belief in the unique selling point of the company, the growth has been a bit of a surprise to its owners, especially given that, having enjoyed a stellar first year in business, the rest has been under the auspices of a global pandemic – a pandemic which hit sport – their entire market – hard.

But remarkably, it was a catalyst to drive the young company forward into a position of strength.

Speaking on the Armagh I podcast this week, Kieran, who hails from Culloville (by way of Belfast a long time ago), said it was their belief that there was a market for the plethora of sports across the island of Ireland – and UK – not being properly serviced.

So Kieran, alongside his Lurgan co-founder, set about packing in their jobs and taking a punt in what was a proverbial leap of faith together.

The pair, like many entrepreneurs, had been formulating plans in their own heads for a long time but, as the old adage goes, two heads are better than one.

Said Kieran: “We decided, look, we’ll push on together, it halves the risk, but it also puts two good heads in there; it was a good start.

“And for the first nine months, it was just the two of us. We did everything in the office, everything from sales to sorting, picking and packing; we’re still doing picking and packing, especially before Christmas, but we just get stuck in and we gave it a go. And it’s really grown from there.”

Their strengths as individuals is what made them, and continues to make them, perfect springboards for the other; Kieran, admittedly, is not one who deals too much with the financial side of things.

Steven, as Kieran puts it, is “very, very hard on the finance side of it”.

“I knew that he would always keep on top of the finances, so they didn’t run away from us. And thankfully it didn’t and because of that we’re in a healthy place now, which is great.”

And despite the pair having roots in the GAA, the brand has attracted teams across the sporting spectrum, and in particular rugby.

With headquarters in Newry – originally in Culloville – Playr-Fit is well-positioned to tackle the market on both sides of the border.

“We’ve really got a foothold in rugby where we have come up with a new material that the rugby clubs, especially in the Munster and Leinster regions, are starting to really take notice of,” said Kieran.

“Rugby is a game where you have your Canterburys; you have Kukri, you have Samurai; there are massive companies, but with that, there’s a downside, that being you don’t get that personal service and there’s longer lead times, so we’re kind of hearing the pain points of rugby clubs.”

While the pandemic proved to be a catalyst moment, their first hire – not that it was planned – gave the company an extra dimension.

That hire came in the shape of Monaghan GAA goalkeeper Rory Beggan, arguably among the finest stoppers in the game at present.

“He was head of Monaghan’s development squads, and he organised gear for them,” Kieran explained.

“So he rang us once we made a delivery, asked us to have coffee and basically said that we had delivered stuff in four weeks, it was all individually packed, and was all correct. He said ‘you wouldn’t believe the hassle I’ve had in the previous years putting these orders together’. And we were a lot cheaper.

“So he just said ‘I think there’s something in this’ and were we looking for someone? To be honest we weren’t. Steven and I agreed it would be a year or two, or at the end of year one, before we look for someone but when someone like Rory comes along, we just did it.

“So Rory became our first employee that September of the first year and he’s still with us. So we’ve jumped from from Rory being our first hire to now having 15 staff, which really shows how far we’ve come.”

While it took some capital to get the company moving – not as much as you might think – for Kieran and Steven it was all in the hours of preparation, and ultimately, the designs.

The reality of owning their own sportwear company didn’t really kick in for Steven until he visited Bundoran in County Donegal.

“We’re only three or four months old, and Steven said he went to Bundoran at Easter,” Kieran recalls. “He said the next next time I go up there I want to see someone wearing a Playr-Fit top, that was his big thing.

“He then went back in the summer for a long weekend and saw someone wearing one, so it was only a few months later, he was buzzing from that.

“One time we were with the kids, down in Kildare Village, just a few weeks ago, just for a day, and someone was wearing a Playr-Fit top and the kids, they’re all excited as you, so that is a big factor. Seeing it all over the country is massive. And then, seeing people in the UK and America wearing them as well, it’s just mind boggling.”

That family investment is vital for Kieran and Steven; for without their support, the task at hand would be much greater. But it’s a proper family affair.

“I know that they have sacrificed a bit over the last two or three years but they know we’re doing it for the right reasons; we’re building something for them.

“It’s still probably hard to take that they’re enjoying the summer and we’re working away but without them we wouldn’t be able to do it and they know that.

“I couldn’t imagine, if I was going home late, maybe nine o’clock some nights and there was not a great atmosphere at home it just wouldn’t be right, but fortunately there is.”

Kieran says his wife Fiona, just like him, gets a buzz when she sees someone wearing a top on social media.

“Just before Christmas we had a few evening shifts of Fiona and the two of my two smallest ones helped pick and pack and they helped with getting stuff out.”

While the support network is there, the idea of Kieran taking an initial punt was cause for concern for Fiona.

“I’m a firm believer that if you think you have a good idea, you have to give it a go. My wife would disagree with me; she would be the cautious one.

“At the time, leaving a full time job to go and start something which wouldn’t pay me for six months, she couldn’t get her head around that. But I’m thinking, if you are strong in your beliefs that something can work, it’s worth giving it a go and if it’s six months, or a year or two years, and it doesn’t work out, then that’s all you’ve lost.”

While it was only one year in and things were going smoothly, Covid-19 had other ideas…but then again, so did Kieran and Steven.

“We’re starting to take legs and all of a sudden, every sport closes down,” Kieran recalls.

“We quickly moved over to face masks. We were one of the first to bring out the branded face masks. We brought that out early April; it was actually a bit of a joke. A fellow I know in New York, his club had just got gear off us so we got face masks done with his club’s crest, and I put it on Facebook. And it just went mad. Companies messaged me on Facebook looking for these face masks – 200 of them or 400 of them – and we actually worked from home, but it was our busiest time ever; that was April, May, June of the first lockdown.”

Northampton Saints came calling, ordering 5,000 face masks. Lotus Cars them came in with an order of 10,000.

Said Kieran: “It just got crazy; it was then I thought, ‘God, this is not just here in our area, this is everywhere’. For me that was the start of it, this thing could take legs. The biggest thing about the face masks was it kept us open and it got a bit of money in the bank to help us then go and push on and employ more staff. At that moment I thought ‘yeah this is going to be big’.

Listen to the whole conversation on the Armagh I podcast here.