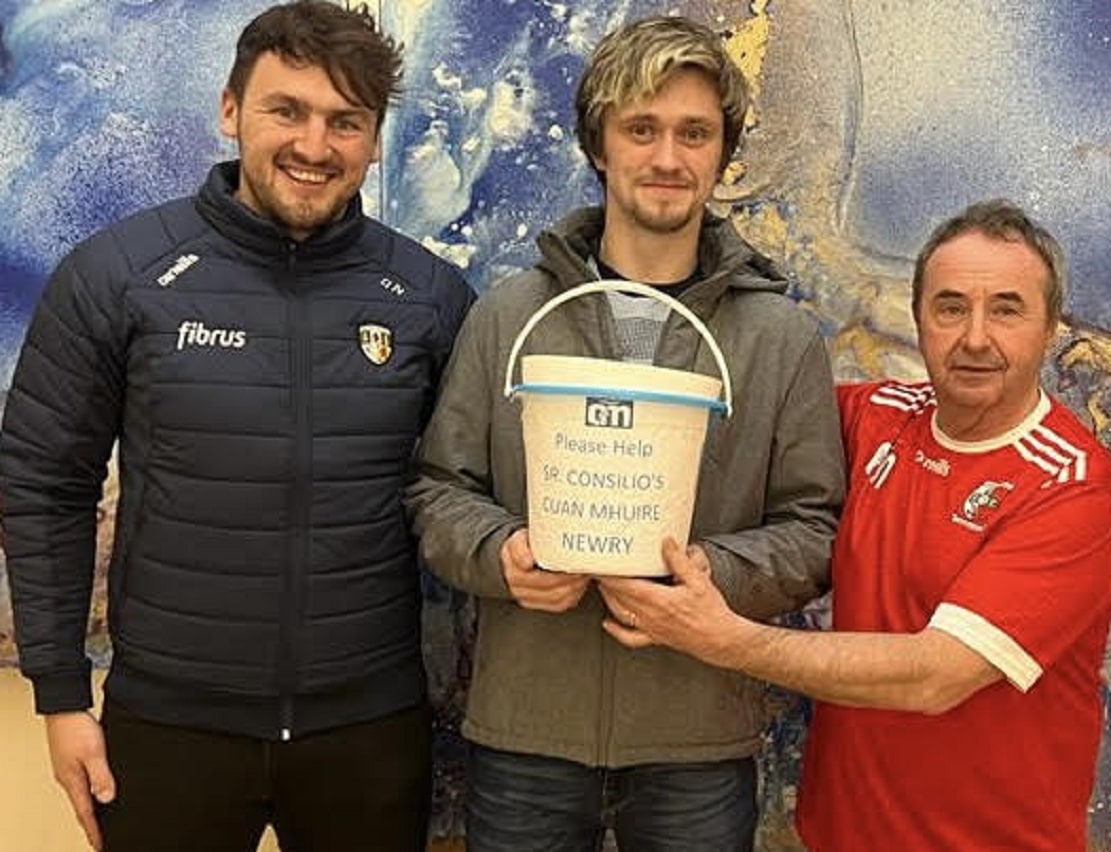 A talented hurler, who managed to beat his additions with the help of Cuan Mhuire in Newry, has said that going into rehab was the “best and most rewarding thing I’ve ever done”.

Antrim forward Domhnall Nugent was speaking at the launch of the annual Friends of Cuan Mhuire street collection.

It will take place in Camlough this Saturday, January 28.

The 26-year-old, who was addicted to cocaine and alcohol, was one of a group of 12 men who entered Cuan Mhuire back in 2019. Today only half of them are still alive.

He told those present: “That is shocking.. that is so, so scary. It shows you how real this is.”

Domhnall spearheads  ‘Let’s Face It’, a health and well-being organisation that shares life experiences around the affects of mental health including trauma, depression, addiction and the struggles of  ‘fitting in’.

He advised anyone who fears they are sliding into addiction to be honest with themselves and to take that first step and seek help.

“A five-minute conversation could be the start of recovery from a life of lying to yourself and others, cheating, ducking and diving,” he added.

At the age of 18, Domhnall had the “world at his feet” – a former head boy with top grades in his A Levels and the offer of a place to study teaching at university, he was also a talented sportsman, seen as a role model by many.

But three years later, cocaine and alcohol had taken over his life and it got to the point where he was doing a line of cocaine in the mornings to help him start his day.

However, with the help of his club, family and the Gaelic Players’ Association, Domhnall sought help and checked into Cuan Mhuire, where he spent three months.

“It was a very daunting experience. It was tough and I was questioning myself; I was beating myself up and even going into the assessment centre where you spend two weeks I remember saying to myself ‘what have you done? You’re 20 years of age and in a rehab centre,” he said.

“I stuck through it and it was the best and most rewarding thing I’ve ever done.”

Camlough man Pat McGinn, who launched the collection along with Domhnall and Galbally Ulster Club Champion footballer Christopher Morris, said: “Friends of Cuan Mhuire is a support network for people in recovery and their families, where people are helped find their feet in the early, and sometimes difficult, days of recovery.

“It provides somewhere to go, someone to talk to and friends to rely on.

“Our Friends of Cuan Mhuire groups are steadily growing with marvellous work being done by our Cuan Mhuire volunteers in places such as Belfast, Newry and Omagh.

“Cuan Mhuire volunteers and ex-residents are involved in our schools and community outreach programmes, all in their own way helping to carry the message of hope and recovery.”

Gerry McElroy, chief executive of Cuan Mhuire, thanked everyone for their support and said the organisation couldn’t continue its work without the “wonderful generosity of families, community and individuals”.

“Sr Consilio and all involved with Cuan Mhuire really appreciate the support,” he added.

‘Let’s Face It’ can be contacted at Contact@letsfaceit.info