Paul’s WhatsApp wager on Liverpool proves own goal – and he pays up proceeds to Hospice!

His misplaced faith and bravado cost Paul £200 but his mates ensured he'd never walk alone as they chipped in £400 too! 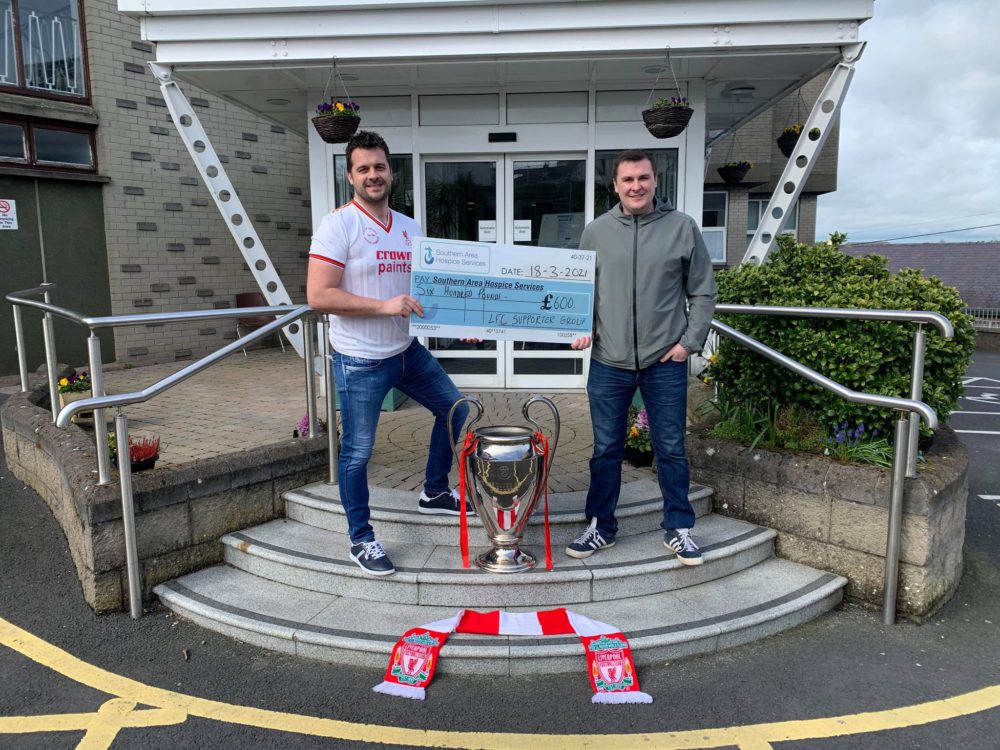 What started out as a WhatsApp wager ended up in a group of friends raising £600 for the local Hospice.

A lot of Liverpool fans got very excited after their team won the Premier League last season, so it came as no surprise that they were expecting big things this season.

One particular Liverpool fan from Burren, Paul Duffy, expected more than big things from Liverpool this season and got very excited during a heated WhatsApp conversation.

He challenged his friend, Conor McKernan, to a bet of £200 which would see Liverpool winning both Premier League and Champions League trophies.

Without any hesitation Conor took the bet and buckled in to watch Liverpool crumble after Christmas.

“Fair play to Paul, he obviously got carried away with himself and got caught up in the excitement of last season,” said Conor.

“I thought naivety like this needed to be punished so I put a £200 wager on it and to my surprise he accepted. It was money in the bank.”

As the season rolled on it became apparent that it wasn’t going to be Liverpool’s year.

“We have a pretty lively WhatsApp group, mainly made up of slagging and football but towards Christmas the excuses started rolling in relating to Liverpool’s injury list and run of bad luck, but the bet had to stand,” Conor added.

With Liverpool conceding the title a few weeks ago, Paul realised it was pay up time and both decided that the Hospice would be worthy recipients of the £200 donation.

With a few of the lads feeling sorry for Paul they all decided to chip in which lead to a further £400 being added to the pot.

Paul added: “The Hospice do great work for our local community and I am glad they are benefitting from my naivety. It’s great the lads all rallied around. YNWA!”

Conor offered the same bet for next season which Paul has kindly turned down.

Southern Area Hospice Services relies heavily on the generosity of local people to continue delivering services, and have stated that they were very grateful to the boys for donating the money.