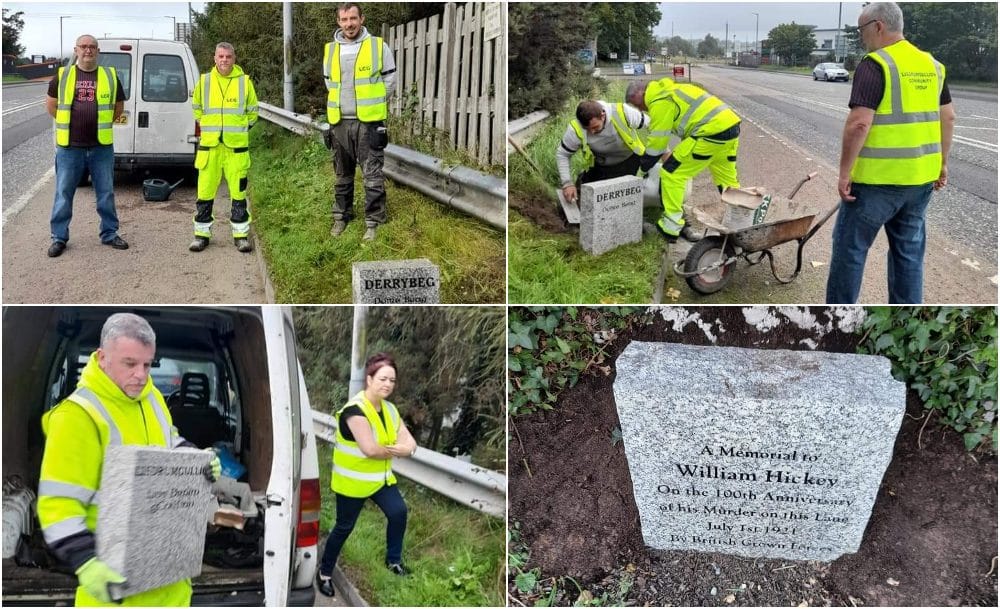 “We are a non funded group and once again we got our begging bowl out with the stone being kindly sponsored by Councillor Pete Byrne and beautifully crafted by Byrne Monumental Works, Crossmaglen.

It was also erected free of charge by Pat Kearns, GG Services & Property Maintenance and in the good company of Gerald McKeown from Lisgullion Park up front doing his bit for the Community.

The exciting important project was inspired by the Ring of Gullion ‘Know your townlands’ project which has overseen the erection of many of these stones throughout South Armagh.

The Lisdrumgullion groups aims and objectives are the same to raise awareness about our townlands, their history, their meaning and why they are important whilst giving us a sense of Community a sense of belonging.”

John also revealed that the LCG on July 1st of this year out of expenses incurred out of their own pockets erected a Centenary Commemoration Stone at Hickey’s Lane at the location where an innocent man William Hickey met his brutal death back in 1921.

On Friday past Group members planted miniature spring flowering bulbs around both of the stones in the Lisdrumgullion District with the hopes of beautiful floral displays early next year.

Those Community Activists who were engaged in the two projects were Colman O’Hare, Gerald McKeown, Pat Kearns, Aislinn Campbell and John McCabe.