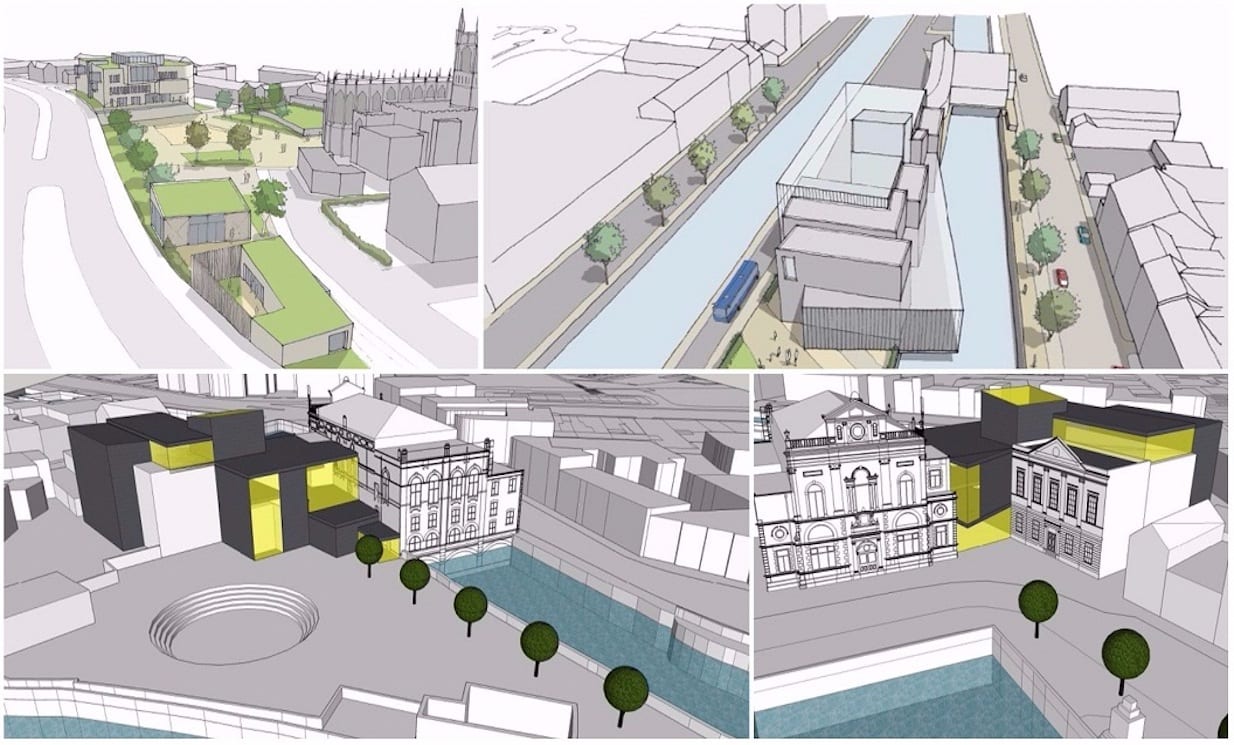 Plans to build a £20 million civic centre and theatre and conferencing venue in Newry could be put back for at least three years if a notice of motion to be debated next week gets majority support.

Details of the development were outlined with an official launch in November 2017.

It was at a briefing and amidst a flurry of excitement in the Canal Court Hotel that Newry, Mourne & Down District Council unveiled a number of development projects over the following 10 years all aimed at breathing new life into the city centre.

The civic centre is expected to replace existing council sites on Monaghan Row and Greenbank, and aligned to the civic centre will be the development of enhanced theatre and conferencing space in the core city centre.

This should have been a time for the work to be pushing ahead.

But Independent Councillor Gavin Malone thinks – even as society seeks to move to a ‘new norm’ and reopen – this project needs to be put back due to the anticipated economic fall-out from the Covid-19 pandemic.

To that end he has tabled a notice of motion and will be seeking the support of councillors of all parties.

He is asking that “council recognises that society has changed fundamentally within the last four months and there will most likely be austere times for many residents of our district for the foreseeable future”.

Councillor Malone also says that council should “recognises the new financial realities in the time ahead for us as a local authority”.

And in doing so, the Independent representative will ask the sitting to endorse his calling that “it is now time to postpone any further work on the proposed new civic centre project for the remainder of this term”.

The current council only came into being after the local government elections in May last year.

So with three more years of the council to go before another poll is held, if approved, the motion would mean no movement forward until 2023 at the very earliest.

However, Sinn Féin Councillor Roisin Mulgrew has said that her party is committed to the regeneration of Newry city and states projects envisaged such as the new Arts and Theatre complex, the new Civic Centre and 15 acre City Park are key to this.

“I and my Sinn Féin colleagues are fully committed to delivering our City Centre Park, Civic Centre and Arts and Theatre complex. Not one or the other, but them all,” she stated.

“These projects will make a huge difference to the economic, health, educational and environmental well-being of the city and surrounding area.

“They have already secured massive investment and Sinn Féin will work tirelessly to ensure they are delivered.”

Councillor Mulgrew added: “We face the twin challenges of recovering from the Covid-19 pandemic and the uncertainties of Brexit. On top of this lies the legacy of over a decade of Tory imposed austerity which has choked our public services and communities of much needed support.

“The only way to recover from these difficulties is for Newry to grow. Our response must be one of investment – in people, communities, infrastructure, public services, and local business. Ordinary workers and families in Newry must feel the benefit of these initiatives.”

Councillor Mulgrew, speaking on the cost of such flagship developments within Newry city, commented: “Sinn Féin, as ever, will insist on the highest degree of accountability when it comes to spending public money.

“We will insist on the greatest degree of openness and transparency whilst remaining committed to the delivery of top-class public services, representing true value for money.

“£8 million has already been secured specifically for the development of the Civic Centre from the City Deals and a further £5m for the Public Realm Scheme.

“The Council fully expect additional funding to be secured. The bottom-line is should that stopping the development of the Civic Centre would see this funding lost.

“Throwing away the opportunity of huge investment for Newry and its people would be unforgivable.”

Party colleague, Councillor Charlie Casey, said: “We will only recover and grow if our local economy is enhanced, people are protected and given the opportunity to live and work in a vibrant, sustainable district.

“That is why Sinn Féin will be redoubling our efforts to develop and rebuild a modern, competitive, and sustainable economy, where we open doors to trade, investment, tourism, and jobs.

“Newry is the only city in our District and our communities are entitled to a Civic Centre and City Park, both of which should be top-of-the-range.

“The Monaghan Row site is not fit for purpose – it’s old and inefficient. If the Council is to deliver a high standard of public services for communities across Newry, Mourne and Down, we need a new Civic Centre.

“On top of that, having the Civic Centre within the city will ensure that several hundred workers remain employed within our city, helping our local businesses and employers – the beating heart of our local economy.

“The Southern Trust have expressed an interest in purchasing the Monaghan Row site to use for Office space, hence freeing up much needed space to be used for clinical purposes within the hospital.

“The option for expansion at daisy hill hospital are limited and to withdraw the potential of acquiring the Monaghan Row Offices offices will have a hugely negative impact on the future of the vital services provided by our hospital and again force staff to travel outside the city for employment.

“Our new Civic Centre has the potential to create a regional hub, attracting even more workers to the city.

“The Civic Centre is so much more that a ‘new home for the Council’ – it’s a massive investment in our city centre, that has the potential to be a vibrant hub for workers and the community, and a massive boost to our local economy.

“We must grab this opportunity with the City Deal to rebuild, redevelop and regenerate our city centre.

“I know that there are some concerns about cost and parking but I believe that funding can be secured to ensure that the cost to the people is kept to an absolute minimum and that the whole project will represent excellent value for money.

“If Council and all stakeholders work together solutions to these issues can and will be found.”

“Local families, workers, communities and businesses should not miss out on investment for our city. For too long Newry and its people have suffered as a border town, partitioned and cut off from its hinterland and passed over for funding by successive British governments.

“We should not be asked to pick and choose when it comes to what we are entitled to and what we deserve. We are no longer second-class citizens – we deserve the best.”

The notice of motion is due to be debated at the monthly meeting of Newry, Mourne and Down District Council on Monday.