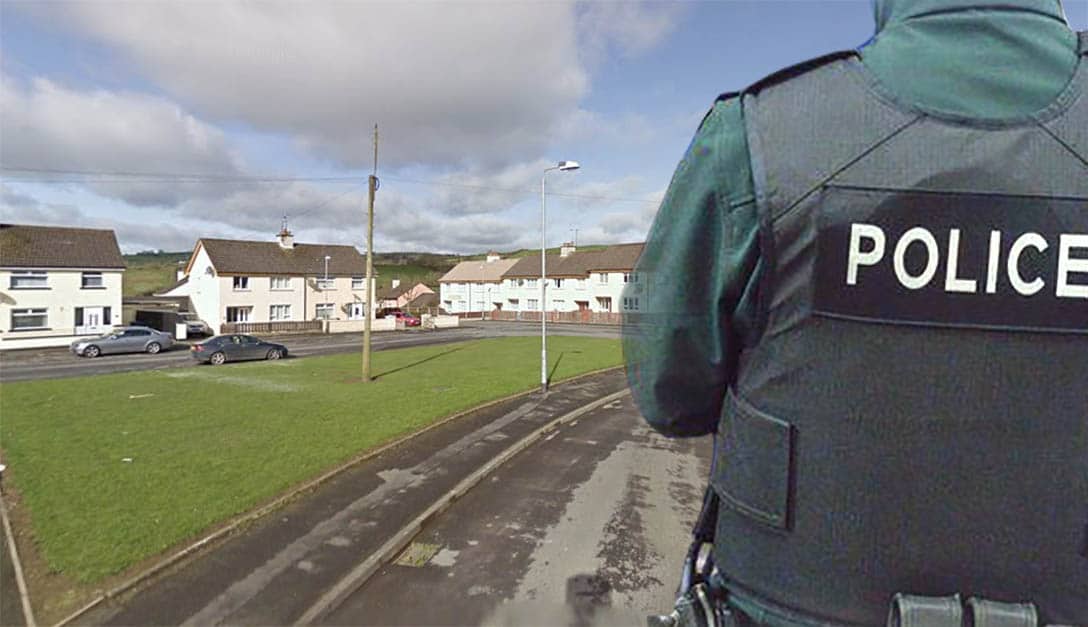 A man who threatened to burn the mother of his child out of her Newtownhamilton home before setting the contents of a bin alight just yards from an oil tank has been jailed.

Michael James Dundon, of Altmore Gardens in Newry, appeared before the city’s Crown Court on Thursday charged with arson, threats to kill, assault on police and threats to damage property.

Two counts of burglary were left on the books.

The 24-year-old pleaded guilty to the charges as His Honour Gordon Kerr KC pointed out, “he was caught entirely red handed and had no choice but to plead guilty”.

Judge Kerr outlining the facts said that on September 7, 2021, shortly after midnight, police received a report from an anonymous caller reporting a disturbance at Dungormley Estate in Newtownhamilton.

This was the home of the injured party – Dundon’s ex-partner.

Initial reports also indicated there was a fire in the rear garden. Police attended at approximately 12.30am with Northern Ireland Fire and Rescue Service. They witnessed the defendant leave the front garden of the house before making good his escape on foot.

Police then spoke with a neighbour who confirmed that at approximately midnight she could hear the defendant shouting: “I swear on my father’s grave, I’m going to burn your house down.”

After a brief period of time the witness saw Dundon emptying bins in the rear of the garden area and saw a fire started shortly thereafter.

Police then spoke with the injured party but she refused to cooperate with the investigation, or to provide a statement, however, an account was recorded on the body worn cameras.

She outlined how the defendant earlier attended the property, appearing under the influence of alcohol. She confirmed that he did not live there and that he was on police bail not to be in Newtownhamilton.

When he did eventually leave, on her insistence, he emptied rubbish out of a bin and set it on fire in the rear garden path.

At 3.20am she made a 999 call requesting police as the defendant had returned to the property. Police arrived shortly after and Dundon again made good his escape on foot.

She then requested the police to stay with her as “she was fearful he would return”.

At 4.25am he returned to the property for a third time, knocked at the back and front to get in. At police instructions, the injured party opened the door for him; he entered the property, not realising police were in the house.

Police were witnesses to him shouting at the injured party, ‘why did you ring the police, give me cigarettes?’.

Police made their presence obvious at which point Dundon struck out at an officer with his left fist hitting him in the mouth causing a swollen lip. He was restrained, arrested and taken to Castlereagh police station for interview.

In the interview, Dundon confirmed that he’d been in Dungormley Estate in breach of his pre-charge bail – “this was his explanation for running off from the police”.

He  said he was “only there to see his child, get fresh clothes and some food” adding “he claims at no point he was in the back garden of the property”.

He denied setting the fire, making threats to kill and the assault on the police officer. He claimed he’d entered the property after being invited in and then walking up the hall he was struck on the head with a police baton without any prior warning.

“This is clearly a dishonest account,” said Judge Kerr.

Judge Kerr said his actions were an attempt “to upset and try and coerce his partner into doing what he wished and treating the house as if he was entitled to come and go as he pleased behaving in a criminal fashion”.

“He claimed that during this period he was dealing with a number of personal issues and he was struggling with his emotional well-being and not having contact with his child due to the breakdown of the relationship. His coping mechanism for that was binge drinking and not sleeping.”

Judge Kerr sentenced Dundon to a total of 23 months – 20 months for arson and threats to kill and an additional three months for the assault on police. He was also handed a restraining order of three years against the the injured party.