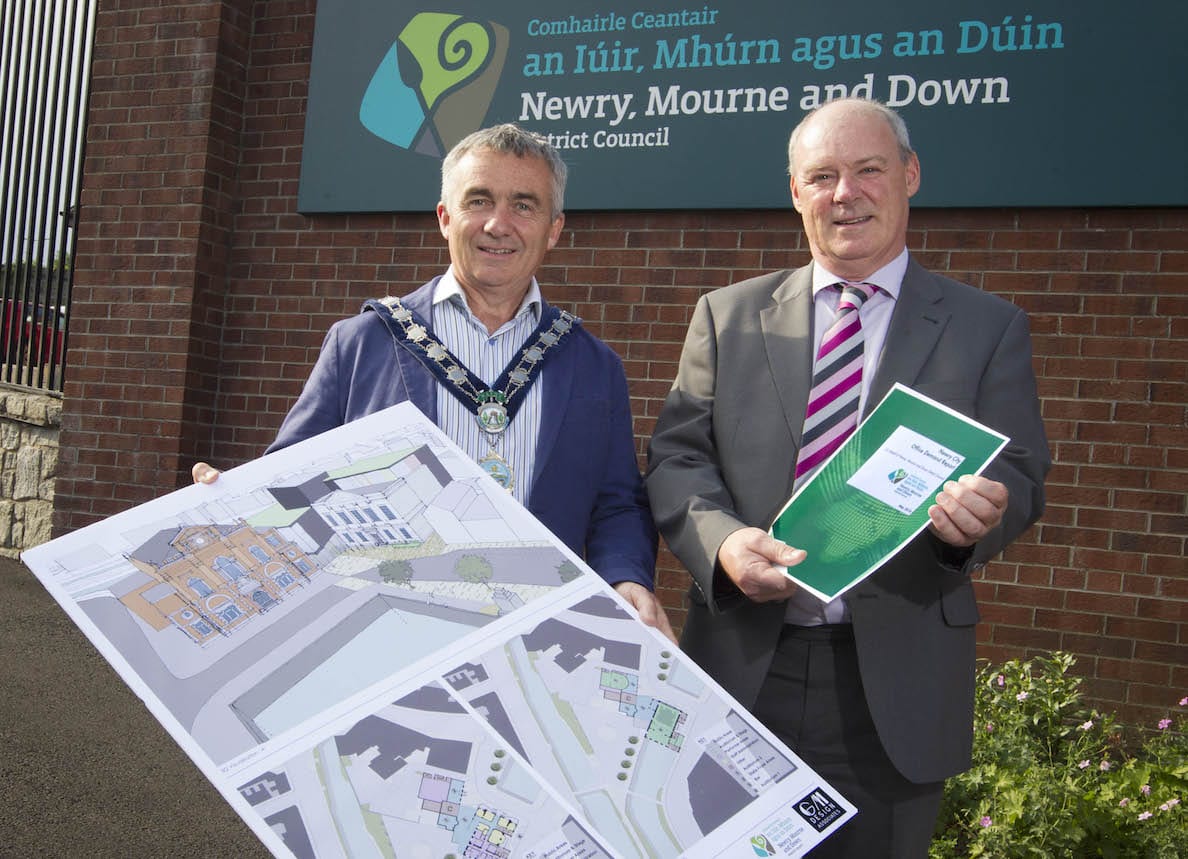 The report was welcomed at a special meeting of the Newry Mourne and Down District Council’s Strategic Projects Working Group.

Specifically, the report details the financial viability of a range of new investment projects including the creation of a new civic hub, a theatre/conferencing centre, and a range of new hotel and office developments.

The report outlined how, if these elements were in place, Newry could likely expect to attract new investment from outside the council area and reinforce its position as a regional gateway city between Northern Ireland and the Republic while also increasing civic pride.

It was backed by two in-depth studies on both the office and hotel sector in the city by global real estate consultancy CBRE which confirmed the need for a broader offering in both these key sectors.

CBRE found that Newry currently suffered from a low provision of office accommodation, and this would only likely be overcome if speculative development was encouraged by a public-sector body such as the Council.

Their report outlined how economic growth, employment levels, business rates income would all benefit from new occupiers locating in the city, attracted by a pool of well-educated talent and taking advantage of attractive occupation costs.

Their report also highlighted the success of office development schemes in nearby Belfast, where locations such as the Gasworks, The Harbour Estate, the Science Park, and Titanic Quarter were all developed speculatively and now enjoy high levels of occupation.

Commenting on the Hotel Report, Brian Lavery from CBRE said: “Based on our market analysis we believe there is capacity for a hotel development in Newry City.

“There is currently limited supply which cannot meet the demand from, in particular, tour operator businesses.

“An increase in the supply of rooms will sit hand in glove with the Council’s drive to generate more business and tourism footfall in the area.”

He added: “We also see potential for more hotel stock in other areas of the district, for example, Newcastle and Downpatrick albeit there would need to be clarity on a year-round tourist offering, ensuring Newry Mourne and Down realises its potential as a leading tourist destination.”

Councillor Mark Murnin, Chairperson of Newry Mourne and Down District Council, said: “As a council we want to create the right environment for the city to flourish in the years ahead, and these reports offer the right roadmap to do just that.

“Newry is already a great place to live and do business, but we have only scratched the surface of its true potential.

“The Civic Hub will modernise and transform the work of the Council, while the proposed new theatre and conferencing centre will help regenerate the city centre and be a fantastic attraction for all our citizens and new visitors to Newry.

“In addition, if we can attract more hotels to the city, then the flow of tourists will increase. Likewise, if we can encourage the development of new offices, then more companies will be attracted to locate here, delivering new employment opportunities for people living in the Newry, Mourne and Down District Council area.”

Liam Hannaway, Chief Executive of Newry Mourne and Down District Council, said: “This is a hugely exciting time for Newry. We have identified where we can have the biggest impact in forging a city which is able to stand shoulder-to-shoulder with the best on the island in the coming years.

“If we create the right conditions and take steps to address the market failure highlighted in the reports, then we can put in place the infrastructure to build a robust economy and a leading tourist destination, reflecting a forward-thinking Council. The building blocks are already there; we just need to get moving.”

The next stage of the process will now see the procurement of a range of integrated consultant team and advisors; surveys and inspections of the Town Hall and Sean Hollywood Arts Centre buildings; the collection of baseline information on current visitor numbers and expenditure; the development of a procurement strategy; soft market engagement with potential delivery partners; the development of an outline business case and development of project management and project governance documentation.