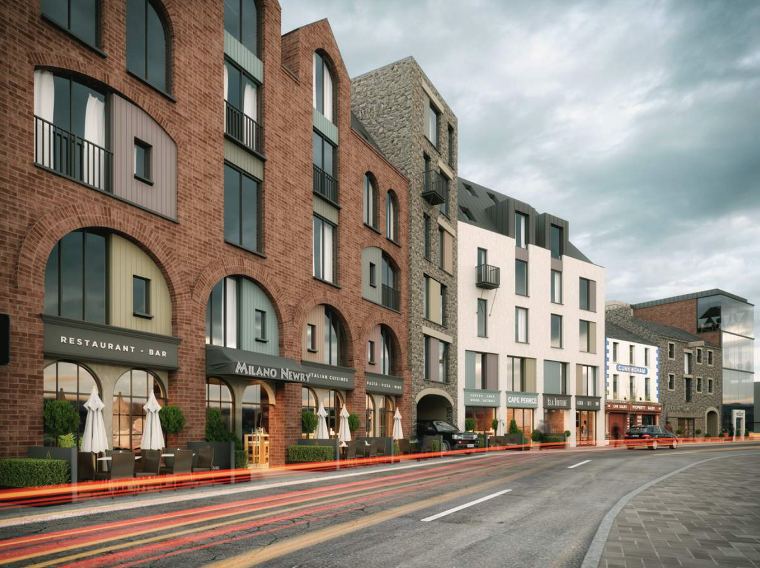 A recommendation to a refuse a major Newry city centre business and residential development has been overturned despite “unacceptable car parking” provision and “sewage concerns”.

The multi-million pound project by Kerr Property Holdings Ltd faced objections from the Department for Infrastructure over a lack of parking provision for its 73 housing units.

Sewage drainage and support issues were also raised by NI Water on the Merchants Quay and Corn Market proposal.

However, a spokesperson for the ‘Pearce’s Gate’ developer stated that the blueprints for the “regeneration” of the city centre was a model for a “car free environment” to support a future “net zero carbon footprint” target.

An agent for the plans also stated that if the councillors refused the designs then “Newry would be effectively closed for business”.

The planning committee heard on Wednesday that there was “an abundance of car parking in Newry” which had been reported in a recent council traffic survey within the last six months.

The mixed use project including offices and retail units will provide only 11 car park spaces on site for people with mobility issues.

It will then look towards the use of public spaces as well as the potential for a car pooling club in co-operation with Translink and a private vehicle rental company.

The developer also stated that it had carried out tests on improving rain water drainage to support the projected increased use of the sewage system. Mournes councillor, Glyn Hanna (DUP) said: “I propose that we overturn the recommendation for refusal as this is a vision of the way forward.

“I have been told that there are 817 car park spaces available just 350yards away and you just can’t argue with that.

“This is a complete and utter no-brainer.

“All other departments have not objected.

“The HED (Historic Environment Division) has approved the use of materials on the listed building and I am sure we could put conditions on the sewage needs and car pooling.

“There is 40p per hour parking in Newry and you wouldn’t get that in Belfast.”

In support of the proposal, Slieve Gullion councillor, Declan Murphy (SF) said: “We should be doing all we can to meet are carbon footprint targets.

“This is a bold and brave project and that’s the direction that we want to be heading in, we have to test these things.

“This is about the regeneration of Newry and everyone agrees with that.”

The councillors voted in favour (9) to overturn the refusal with one abstaining.

Planning chairman, Declan McAteer added: “I am delighted we have got this over the line for the development of Newry, this is a major landmark.

“I wish the developers all the best, it has been a long process on all for a number of years.”