Its coat was matted with faecal matter, it suffered urinal scalding and required a tooth to be extracted 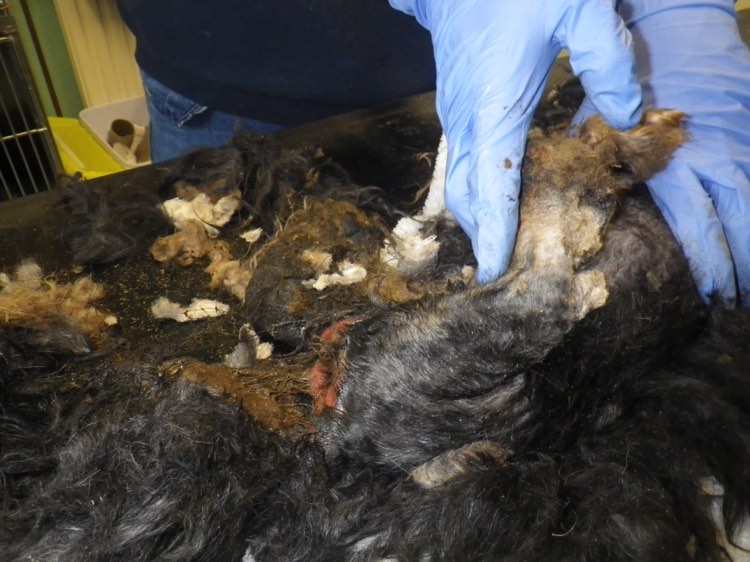 A Newry man has been banned from keeping animals after he was convicted of causing unnecessary sufferin to a dog.

He was found guilty at Newry Magistrates’ Court of failing to ensure the welfare of a dog in his care and causing it unnecessary suffering.

Council initiated action against the defendant following an investigation by an Animal Welfare Officer. On 5 April 2018, PSNI officers visited a property at Park Urney, Forkhill and removed a dog under the Welfare of Animals Act (NI) 2011.

The PSNI contacted the Animal Welfare Officer and arranged to meet at the contracted veterinary practice.

On arrival they made the Animal Welfare Officer aware of the circumstances the dog was found in and noted that the animal appeared to be in a state of distress.

The dog had to be sedated at the Veterinary practice in order to have its coat shaved due to the extreme matting that was present. This was caused by a build-up of faecal matter and a lack of grooming.

The animal was also found to have urinal scalding and required a tooth to be extracted.

The dog was examined by a Veterinary Surgeon and certified as suffering.

Newry, Mourne and Down District Council brought the two charges under the provisions of the Welfare of Animals Act (Northern Ireland) 2011. The defendant did not appear in court and the case was proven in his absence.

Upon hearing the facts, District Judge Mr Perry convicted the defendant, imposing a fine of £500 on each of the two charges before the court, totalling £1000. He also awarded £150 for legal fees and £60 for court costs.  A Life-time Disqualification Order was imposed on the defendant banning him from owning or keeping any animals.

Newry, Mourne and Down District Council Chairperson, Councillor Laura Devlin said, “This ruling will hopefully serve as a reminder that anyone who owns a domestic pet, must take proper steps to care for them, as required under the Welfare of Animals Act (NI) 2011.

“The Council will take action against anyone found failing to ensure the welfare of an animal, and if necessary, they will be brought before the courts and dealt with appropriately. Furthermore, we are pleased to report the dog was signed over by the defendant and successfully rehomed.

“Cases of cruelty and neglect can be reported to our Animal Welfare team who will use enforcement powers to fully investigate all cases and take formal action, which may include the issuing of Improvement Notices, and in the most serious of cases, removing animals and prosecuting offenders.”

The Council’s Animal Welfare team can be contacted on 028 3751 5800 or email on animalwelfare@armaghbanbridgecraigavon.gov.uk .