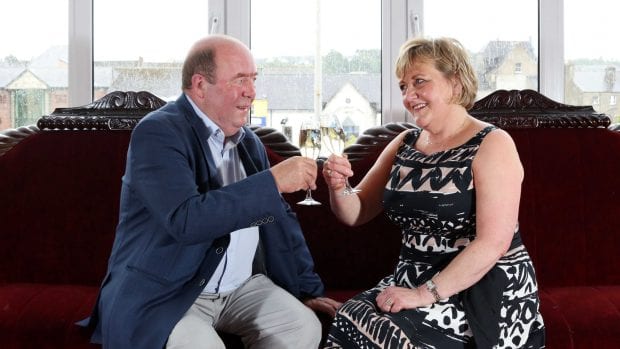 Charity workers Colin and Eithne Bell have revealed their plans on how they will spend their winnings after scooping a cool £1 million!

The retired couple are celebrating after hitting the jackpot on the EuroMillions UK Millionaire Maker nine days ago.

Today they were revealed as the competition’s latest millionaires at the Canal Court Hotel in Newry.

And typical of Colin (64) and his wife Eithne (61), they will spend most of it on others, their family, as they plan on “changing the lives of our children”.

The couple founded The Kevin Bell Repatriation Trust four years ago in June 2013 after their son Kevin tragically lost his life whilst in America.

Former teacher Colin, and Eithne, a retired nursery school worker, were settling in for a quiet night in front of the telly when their evening took an unexpected but remarkable twist.

“I was watching the early evening news with Eithne when the EuroMillions numbers flashed up on screen,” said Colin. “I remembered that I’d bought a ticket for the draw but that I hadn’t checked my numbers so I took out my wallet, went online and was disappointed to see that I hadn’t matched any numbers.

“However, when I checked the unique Millionaire Maker code I was totally floored to see that it matched my code!” he added.

In disbelief, Colin turned to his wife to tell her that they had just become millionaires!

He continued, “I told Eithne that I thought we had just won £1M and she laughed, thinking that I was joking. But when I repeated it and she saw the look on my face, she soon realised that I was being serious.

“Once the shock passed, we decided to go to my daughter’s house, Ciara (32), who lives a couple of miles away, to get her to check again as we just simply couldn’t believe we’d won.”

When Colin and Eithne explained to their daughter why they were there she was overjoyed.

“After checking the code and seeing that it matched Ciara started dancing around the room and whooping. We hadn’t realised until that point just how numb we both were but the news finally started to sink in. Ciara told us to contact Camelot and after speaking to them we began to feel that it was actually really happening.”

Colin and Eithne have six children so they decided to contact them all to tell them the amazing news.

Colin said, “We told our son Brendan (31) when he arrived home from work and then we gave Eamon (29), who lives in Australia, a call and they were both totally astounded. Then we contacted our two sons who live in Dublin, Sean (32) and Conor (28). All of their reactions were just brilliant. Conor even said, ‘How do you expect me to go back to work after hearing this news!’ – so it was smiles all round.”

As this was all unfolding, Colin and Eithne’s daughter Maeve (26), who didn’t know about the life-changing news, was making her way back to Northern Ireland from a two year stay in Australia.

“My wife and I, together with my three year old grandson, Daniel, picked up Maeve from Dublin Airport the next day. We said nothing of our news until we had her safely in the car but when she heard we had to pull over as she was in total shock and needed some air. Her reaction was priceless. In fact we’ll never forget how each of our kids reacted – we just never expected any of this to happen!” said Colin.

So, what do the couple plan to spend the money on?

“My wife would love a sun room extension on the house and a new car and I plan to buy a couple of 10 year Premium Level Tickets for Croke Park,” Colin explained. “But we’ll spend most of it changing the lives of our children – that will bring us so much joy!”

The Kevin Bell Repatriation Trust has helped repatriate the bodies of hundreds of Irish people who have died suddenly overseas since its formation in June 2013. The Trust was formed after Colin and Eithne lost their 26-year-old son Kevin in a hit-and-run accident in New York. More information on the Trust can be found at www.kevinbellrepatriationtrust.com.

The National Lottery has been changing the lives of winners like Colin and Eithne as well as communities across the UK for more than 21 years with players raising, on average, over £30 million for National Lottery-funded projects every week.

In Northern Ireland alone there have been well over 20,000 individual National Lottery grants awarded to individuals, organisations and projects across the arts, sports, heritage, health, education, environment, charity and voluntary sectors.