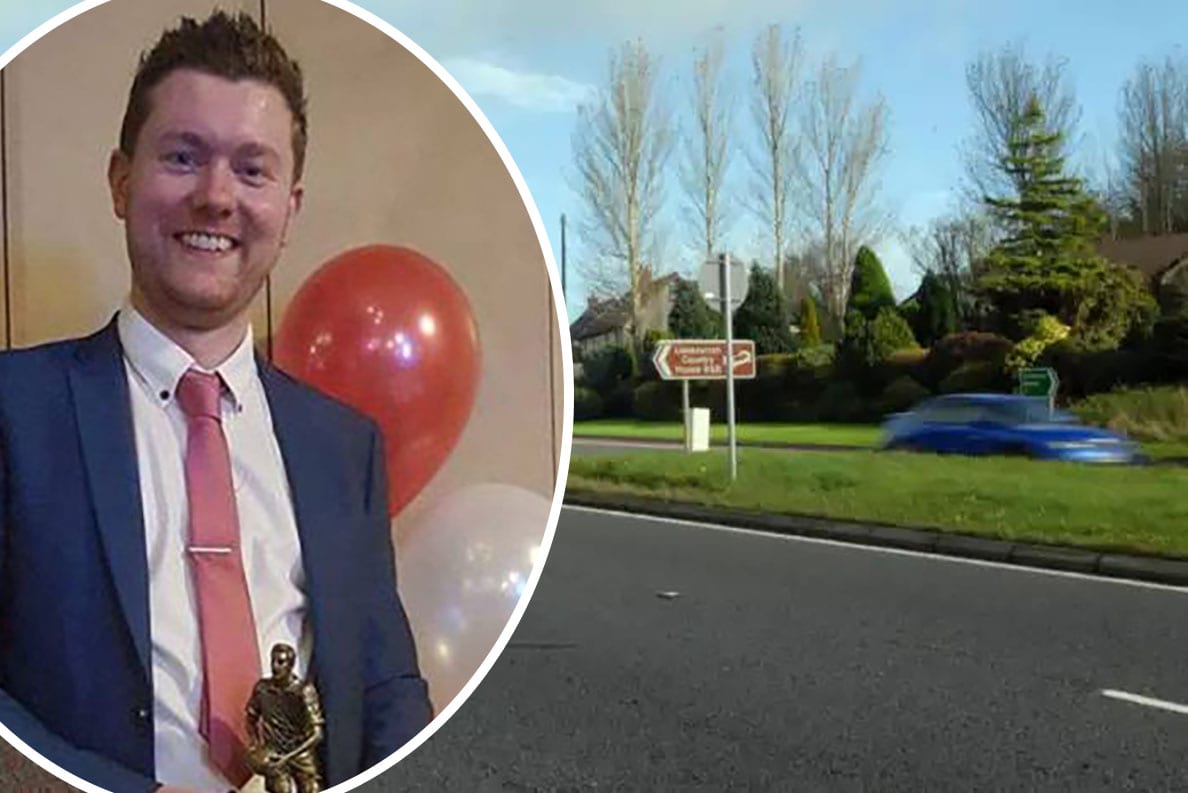 Monica Heaney, who lost her son Karl (inset) on the A1 in May, with SDLP MLA Justin McNulty and Councillor Seamus Doyle.

Work is expected to start in 2021 to close up all of the central reservation crossings on the notorious A1, it has been confirmed.

A total of 21 crossing points will be ‘stopped up’ and a central safety barrier put in place.

The confirmation has been given by Divisional Roads manager Simon Richardson during a meeting with political representatives at Marlborough House in Craigavon.

It comes after a high-profile campaign launched by Monica Heaney, whose son Karl died after a collision on the A1 in May.

The 27-year-old had been travelling back from training with Newry Mitchels GFC to his home in Carryduff.

A petition ‘A1: How Many Must Die?’ was launched and over 10,000 people signed, demanding action and forcing government to respond.

The safety upgrades on the A1 cover the carriageway between Belfast and the border with County Louth.

Monica also attended the meeting and has been praised for her efforts in raising the profile and need for the works to prevent others suffering similar heartache to her own in the future.

The works will see the closure of all central reservation crossings meaning there will be no more U-turns or right turning out of junctions on to the A1.

New safety barriers are to be installed in the central reservation in an effort to improve driver safety.

The SDLP’s Justin McNulty said:”The Department of Infrastructure plans are very welcome. They are essential and long overdue. Sadly, for families who have tragically lost loved ones along the route over recent years, any improvements will be too late.

“At this stage, the works are at development stage and works are planned to commence in 2021.

“Whilst revenue funding covering all the preparatory work, which is 50% grant aided from the European Union, has been released, the releasing of the capital funds needed for construction will require Ministerial approval during 2020.

“I welcome these works, even as an interim measure. I firmly believe that this road needs to be upgraded to full motorway status. The route connects both capital cities on this island and the main route connecting both cities must be of a standard befitting the importance of the trunk route.

“At present it is confusing – you leave the motorway at Sprucefield and join the dual carriageway until you reach the border with County Louth and then return to a motorway.

“The only difference you notice is the signage, so in reality you think the road is the same, but it is clearly not.

“At a minimum and as an interim measure, this needs to be rectified with appropriate warning signage and the necessary safety improvements at junctions and crossings completed without delay.”

The meeting also heart from Monica Heaney, and Mr McNulty praised her for her “amazing strength”.

He added: “She has turned her own personal grief into campaigning for improvements along the road. I want to thank Monica for her bravery in joining us today to share her story with the steely determination she has to prevent any other family from experiencing the trauma she and her family have been through.

“It really struck home when Monica told us that her son Karl would still be alive today if the proposed road safety measures had been completed.

“Our shared goal as political representatives must be to ensure there are no more families who lose a loved one on this road.

“I hope these planned improvements commence without delay so that they will go some way to prevent any loss of life or serious accidents in the future on this stretch of the A1.”

A Sinn Féin delegation was also present and welcomed “positive discussions” with the Department for Infrastructure on progress of the highly anticipated A1 scheme.

Speaking after the meeting with the Roads Southern Senior Management team, South Down MP Chris Hazzard said: “More than 40,000 vehicles commute along this stretch of carriageway on a daily basis making the A1 a strategically important transport corridor; yet the existing road layout and mix of agricultural and local traffic criss-crossing the carriageway at dozens of locations along the route undoubtedly increases the risk of a collision.

“Whilst these improvements will undoubtedly improve road safety and route consistency along the A1; they will of course take time to pass through the statutory processes before construction is complete.

“With this in mind we have today asked DFI Roads to explore ways in which additional signage or driver awareness initiatives can be implemented in the meantime to improve the existing road safety features and help raise drivers’ awareness.

“Sinn Féin look forward to working with DFI Roads in the time ahead to ensure the successful implementation of this scheme and would again appeal to road users on the A1 to be mindful of the particular road dangers that exist and reduce their speed appropriately.”