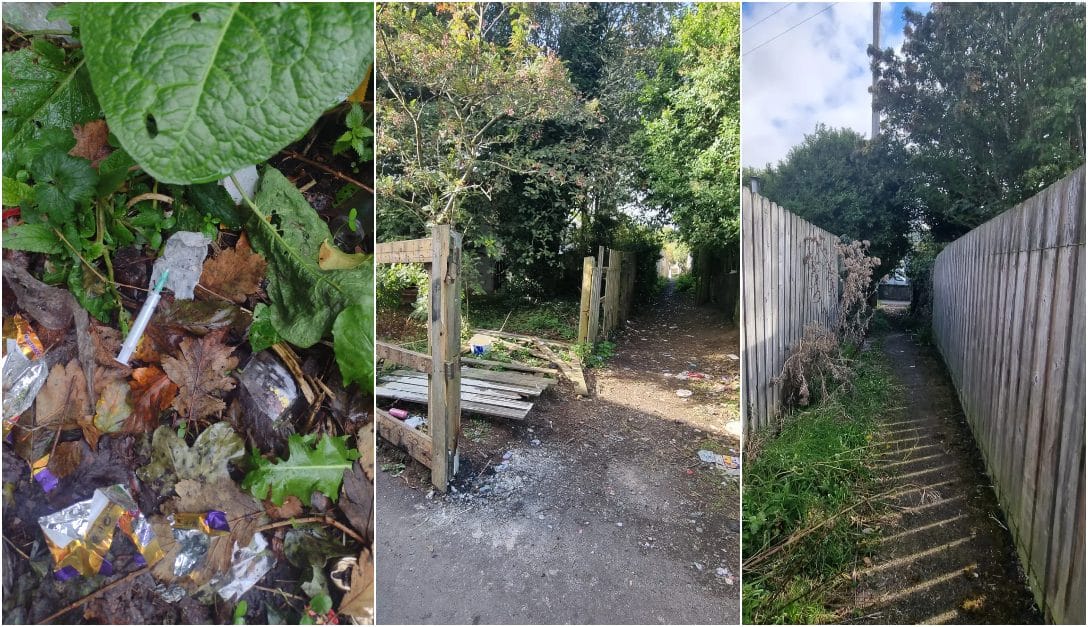 Residents of a retirement complex in Newry are becoming more and more distressed as anti-social behaviour – including drug use – plagues the area.

The latest concerns were raised when drug paraphernalia was found in an alleyway between Clanrye Fold and Clanrye Avenue, in the Meadow area of the city.

Following these concerns raised by local residents – including those living in the nearby Clanrye Fold – Sinn Féin MLA Liz Kimmins met onsite with representatives from Department for Infrastructure and Newry, Mourne & Down District Council.

Speaking following the meeting the Newry/Armagh MLA said: “Local residents have been highlighting anti-social behaviour occurring at this site which has been particularly distressing for the families living closest to it, especially as there are a high number of elderly people living here.

“The alleyway has very clearly been neglected for a significant period of time as it is covered with litter, overgrown bushes, and more disturbingly, what appears to be drug paraphernalia.

“I met onsite with representatives from DFI and NMDDC last month in an effort to determine who has responsibility for the alleyway and to ensure these issues are addressed as a matter of urgency.

“DFI have since confirmed the alleyway is adopted by their department and are subsequently working with Council to have the site deep cleaned and made safer. I have also agreed to highlight the findings with PSNI to ensure it is monitored for the safety of local residents.

“Workers from DFI expressed real concerns following their discovery of needles at the site.

“Not only is this very worrying for people, especially children, living in the local area, but also for those who are tasked to clear the area and restore it to its original state.

“I therefore want to thank DFI and Council for taking action to address this, and to Radius Housing who are in the process of replacing the fencing around the Fold which has also been badly damaged.

“Sinn Féin will continue to work with all the relevant bodies to ensure our communities are maintained to a high standard, and are safe for all our citizens across the constituency.”